Germany’s AfD rushes to embrace immigrants ahead of intelligence probe 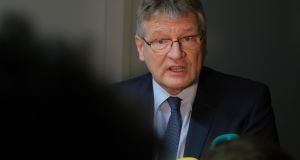 AfD co-leader Jörg Meuthen told the conservative Frankfurter Allgemeine on Wednesday there was ‘not even the slightest reason’ to allow observation. Photograph: Sean Gallup/Getty Images

In a sharp U-turn, Germany’s far-right Alternative für Deutschland (AfD) insists it is a political party for all German citizens, even naturalised immigrants.

The shift comes just days before an expected decision from Germany’s domestic intelligence (BvF) to place the party under observation.

“As a party respecting the rule of law the AfD acknowledges unconditionally the German people as the sum of all persons who hold German citizenship,” the party said in a position paper.

A recent arrival with a German passport, the party added, was “before the law equal with the descendant of a family living centuries in Germany”. Insisting there were no first- and second-class citizens, the paper invites “all Germans – without and without a migration background – to build with us a peaceful, democratic, rule-of-law-based and self-confident Germany”.

Such claims are a given for other parties, based on Germany’s post-war democratic order – but not the AfD.

It began life eight years ago as an opponent of EU bailouts but pivoted to an increasingly anti-immigrant platform as the euro crisis sagged and the 2015 migration crisis spiked.

During this period, party officials suggested shooting migrants at the German border and revived race-based politics using dog whistle terms like “Völkisch” that were popular in the Nazi era.

Eastern AfD members embraced this approach and leaders from the eastern states of Brandenburg and Thuringia, Andreas Kalbitz and Björn Höcke, fronted and formalised this push with their own wing inside the party.

Their growing influence opened wide and bitter divisions within the AfD, and prompted a concerted pushback by moderate conservative-liberals to reclaim the party’s ideological reins.

AfD co-leader Jörg Meuthen, an MEP in Brussels, led a successful campaign to ban the Kalbitz-Höcke party organisation, formally at least. The party expelled Mr Kalbitz from its ranks, amid claims he hid previous membership of a neo-Nazi group, a decision he will challenge in court on Friday.

Formally defining the party as a threat to Germany’s post-war constitution allows the domestic intelligence agency (BfV) to set aside restrictions on its domestic activities to tap AfD party communications and plant or recruit informers within party ranks.

For two years the agency has conducted a preliminary investigation of the party, as anti-immigrant rhetoric helped the party into all 16 German state parliaments. It is also the largest opposition party in the Bundestag. In its new position paper, the AfD now distances itself from racist ideas and terms it disputes ever using, claiming the party is a victim of “untenable suspicions”.

Mr Meuthen told the conservative Frankfurter Allgemeine on Wednesday there was “not even the slightest reason” to allow observation.

Last year the AfD’s federal spokesman Christian Lüth resigned after he was recorded describing himself as a “fascist”, and the AfD’s interest in migrants was purely for electoral gain.

“Afterwards we can always shoot them,” he told an undercover journalist, “or gas them.”