In his first hours as US president, Joe Biden plans to reverse some of the most controversial decisions of his predecessor including the restriction on immigration to the US from some Muslim-majority countries and leaving the Paris climate accord. 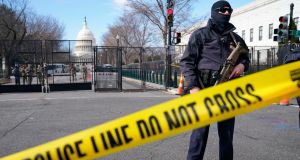 Security is increased around the US Capitol ahead of the inauguration of president-elect Joe Biden and vice-president-elect Kamala Harris on Wednesday. Photograph: AP Photo/John Minchillo

Incoming US president Joe Biden is planning an ambitious slate of executive orders in the first days of his presidency, as he seeks to distance himself from the policy objectives of Donald Trump’s four years in office.

“President-elect Biden is assuming the presidency in a moment of profound crisis for our nation,” wrote Mr Biden’s chief of staff Ron Klain in a memo to senior staff this weekend. “We face four overlapping and compounding crises: the Covid-19 crisis, the resulting economic crisis, the climate crisis, and a racial equity crisis. All of these crises demand urgent action.”

Mr Biden, who will be sworn in at noon (5pm Irish time) on Wednesday as the 46th president of the United States, will sign several executive orders on his first day in office. This includes an order to rejoin the Paris climate agreement, and a reversal of his predecessor’s ban on several Muslim-majority countries which was introduced in the early days of Mr Trump’s presidency four years ago.

Mr Biden will also propose an immigration Bill, a politically-fraught issue in Congress. Any effort to legalise America’s estimated 11 million undocumented immigrants would also include the thousands of Irish living in the US without authorisation. However, campaigners warned that securing agreement on a path to citizenship for illegal immigrants will be a tough challenge.

He will also issue a federal mask mandate, and require mask-wearing for inter-state travel.

On Thursday, the new president is expected to announce a series of measures to tackle the coronavirus pandemic, including a new plan on testing which would allow schools and businesses to reopen safely.

Mr Biden is expected to travel from his home in Wilmington, Delaware to Washington on Tuesday and spend the eve of inauguration day at Blair House, the official residence used by visiting dignitaries.

He will attend a private mass at St Matthew’s Cathedral – the church where John F Kennedy’s funeral took place – on Wednesday morning before the inauguration ceremony begins at noon at the west end of the US Capitol.

Mr Trump will become the first president since Andrew Johnson in 1869 to skip the inauguration of his successor. Like Mr Trump, Mr Johnson was also a one-term president who was impeached.

Mr Trump, who spent the weekend at the White House meeting with advisers, including his lawyer Rudy Giuliani, will leave Washington on Wednesday morning and fly to Mar-a-Lago in Florida on Air Force One. He is expected to hold a formal, military-style send off at the White House or at Joint Base Andrews where Air Force One is based.

Security remained tight in Washington over the weekend, with thousands of national guard troops pouring into the city. Concrete barriers and metal fencing have been erected throughout the downtown area, with armed troops patrolling bridges and main arteries into the city.

A Virginia man was arrested on Friday night at a checkpoint near the US Capitol and was found to have a gun and hundreds of rounds of ammunition in his vehicle. He was carrying identification that was not authorised for entry, prosecutors said, though the man said he had got lost and had been working as a private security guard.

On Saturday morning, police arrested a woman who was pretending to be a member of law enforcement.

More than 70 arrests have been made in connection with the attack on the US Capitol on January 6th. The FBI is continuing to seek information from the public about rioters who were pictured in the Capitol on the day of the attack.

Mr Trump became the first president in history to be impeached for a second time, when the House of Representatives charged him with inciting an insurrection last week. His trial in the Senate will take place after he leaves office.