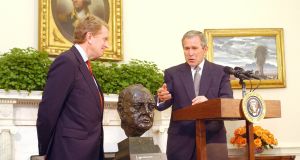 Boris Johnson played down Joe Biden’s decision to remove a bust of Winston Churchill from the Oval Office as he seeks to build a relationship with the US president.

The British prime minister is on the back foot with the new US administration. Mr Biden has never met Mr Johnson, but in 2019 he called the prime minister a “physical and emotional clone” of his predecessor Donald Trump.

In the run-up to the Brexit referendum in 2016, Mr Johnson caused a diplomatic row when, as mayor of London, he insulted then president Barack Obama over his decision to move another bust of Churchill out of the Oval Office when he became president.

Writing in the Sun newspaper, Mr Johnson implied that Mr Obama’s heritage was behind the decision. “Some said it was a snub to Britain. Some said it was a symbol of the part-Kenyan president’s ancestral dislike of the British empire – of which Churchill had been such a fervent defender.” Mr Biden was Mr Obama’s vice-president.

Asked about the decision by Mr Biden to remove the bust, Mr Johnson’s spokesperson said on Thursday that “the Oval Office is the president’s private office, and it is up to the president to decorate it as he wishes”.

Number 10 insisted the removal of the bust did not indicate a “snub” to Britain by the new administration, and Mr Johnson was eager to forge a strong working relationship.

“We are in no doubt of the importance that the president places on our relationship with the US. The PM looks forward to working with him as we move forward. British prime ministers have always had close relationships with US presidents and that will continue.”

The White House did not respond to a request for comment on the significance of the removal of the bust for US-UK relations.

Ashley Williams, deputy director of Oval Office operations, told the Washington Post during a tour of the room that “it was important for President Biden to walk into an Oval that looked like America and started to show the landscape of who he is going to be as president”.

UK officials have been unnerved after Mr Biden spoke out in public last year against the potential implications of Brexit for the Belfast Agreement and the impact on any future US-UK trade deal.

However,the subsequent post-Brexit trade deal has made US-UK relations easier, and those close to Mr Biden’s team do not expect a negative lasting impact. His team has nevertheless made clear it will be slow to strike new trade deals.

Meanwhile Mr Johnson has sought to distance himself from leading figures in the Trump administration after outgoing US secretary of state Mike Pompeo hit out at “woke-ism, multiculturalism, all the -isms” in a tweet in his full, final day in office.

Commenting on Mr Biden’s inauguration, Mr Johnson said: “It’s a fantastic thing for America, for a country that’s been through a bumpy period and for us and America, it’s a big moment, we’ve got things we want to do together, we’ve got to bounce back from Covid together.” – Copyright The Financial Times Limited 2021