Juncker says EU will ‘not stand still’ in bullish address 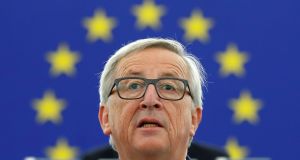 European Commission president Jean-Claude Juncker addressing the European Parliament in Strasbourg: he said the EU must seize the moment of economic upturn and “catch the trade winds in our sails”. Photograph: Christian Hartmann/Reuters

In a resolutely upbeat and integrationist state of the union speech to the European Parliament, Jean Claude Juncker has called on the EU to seize the moment of economic upturn to look decisively to the future and “catch the trade winds in our sails”.

“Europe was not made to stand still. It must never do so,” the European Commission president told MEPs in Strasbourg, recalling the words of Helmut Kohl and Jacques Delors that Europe succeeded when it demonstrated audacity.

Brexit got a mention only in passing, “a sad and tragic moment . . . We will always regret it.” The message of the omission was clear – the union would not be defined or circumscribed in its ambition by the UK’s decision.

And the union was above all a “union of values”, he said, of freedom, equality and the rule of law, implicitly criticising, to applause from MEPs, the governments of Hungary and Poland with whom the commission is in dispute over their refusal to accept burden-sharing of refugees and Warsaw’s “reform” of the courts.

Mr Juncker became most impassioned in his denunciation of what he saw as the persistence of east-west deep inequalities in the EU. “Europe must breathe with both lungs. Otherwise our continent will struggle for air.” It was unacceptable that there were, in 2017, children dying needlessly from diseases that should long have been eradicated, he said, referring to EU support for national vaccination programmes for measles.

“Workers should earn the same pay for the same work,” he insisted, promising to establish a “labour authority” to enforce common standards of social rights in the single market.

And he gave a commitment to strengthening national consumer protection regimes in eastern Europe “Slovaks do not deserve less fish in their fish fingers, Hungarians less meat in their meals, Czechs less cacao in their chocolate . . . ”

It was also time, he said, to admit Romania and Bulgaria to the frontier-free regime of the Schengen system. All a not-so-subtle message to Budapest about the rootedness of the union in practical solidarity.

Announcing a series of legislative initiatives, a “road map” for the future of the union, on jobs, trade, the digital economy, climate change, democracy, and migration, Mr Juncker also set out a series of institutional changes which he argued would make the union more effective and comprehensible.

The jobs of president of the commission and president of the European Council, a post currently filled by Poland’s Donald Tusk, should be merged, he said. He made the case, strongly supported by France’s President Emmanuel Macron, for a new EU economy minister, enlarging the role and powers of the economic affairs commissioner.

Voting in the Council of Ministers in a number of key areas, including taxation and foreign affairs, should move from unanimity to majority, he said, a proposal that is likely to meet with strong opposition in Dublin.

“I am strongly in favour of moving to qualified majority for decisions on the common consolidated corporate tax base, on VAT, on fair taxes for the digital industry, and on the financial transaction tax. Europe has to be able to act quicker and more decisively,” he said.

Such changes in the voting system could be made without treaty changes, but only with the unanimous support of heads of government.

In addition to the recently concluded trade deals with Japan and Canada, and ongoing talks with Mexico, Mr Juncker announced the opening of talks with Australia and New Zealand, promising a new openness in publishing the content of talks. And in response to French concerns over Chinese purchases of strategic European companies, he proposed to open a new framework for screening strategic investment.

The commission will shortly publish new proposals on reducing carbon emissions in the transport sector, and plans to fight terrorist propaganda online with a European cybersecurity agency.

He pledged to work urgently with the UN and the Libyan authorities to improve the “scandalous” conditions under which refugees are being held in Libyan detention centres. And he promised to step up aid to African countries to assist in accepting returnee refugees.

Mr Juncker stressed the priority of maintaining a credible EU enlargement programme for the countries of the western Balkans but insisted that Turkish membership is “ruled out . . . for the foreseeable future”.

“Turkey has been taking giant strides away from the European Union for some time.

“Journalists belong in newsrooms, not prisons . . . Let our journalists go. And not just them either. Stop insulting our member states by comparing their leaders to fascists and Nazis . . .”

“Sometimes I get the feeling Turkey is intentionally placing these roadblocks so that it can blame Europe for any breakdown in accession talks.”