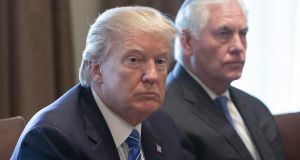 US president Donald Trump and secretary of state Rex Tillerson at a meeting with Najib Razak, Malaysia’s prime minister, in the White House. Photograph: Chris Kleponis/Pool via Bloomberg

US president Donald Trump has warned that sanctions against North Korea are “nothing compared to what ultimately will have to happen”, in a significant escalation of rhetoric towards the nuclear state.

Speaking alongside the Malaysian prime minister, Najib Razak, following a meeting at the White House, Mr Trump described new sanctions agreed by the United Nations on Monday evening as “a very small step”.

The UN Security Council agreed late on Monday to a new set of sanctions in response to Pyongyang’s latest nuclear test, but stopped short of imposing an oil embargo that had been favoured by the United States.

Mr Trump welcomed the fact that the measures had been agreed unanimously by all 15 members of the council but said they were “nothing compared to what ultimately will have to happen”.

Earlier on Tuesday, North Korea hit out at the latest round of sanctions, vowing that the United States would “suffer its greatest pain” for leading the push for the new measures.

The sanctions represent the latest incremental increase of economic pressure by the UN against North Korea in response to its heightened nuclear activity, but they are not as ambitious as the United States had hoped.

The new measures will target the country’s textile exports and also seek to cap the number of North Koreans who work abroad and repatriate money at the current level of 100,000.

But while the package of sanctions will reduce oil and fuel exports to North Korea by about a third, it stops short of a full oil embargo.

China, which provides most of the oil to North Korea and wields a security council veto, has opposed such a move. It has argued, along with Russia, that an oil embargo would lead to economic collapse and destabilisation in the country.

Similarly, a US proposal to allow countries to stop and search ships entering and leaving North Korean waters was diluted; such searches must now be done with the consent of the country where the ships are registered. The resolution also prohibits the use of force should the vessels not comply, as had been proposed by the US.

Nonetheless the new sanctions are expected to have a material effect on the North Korean economy, which has been faced with an incremental set of international sanctions in recent months as it has stepped up its nuclear testing.

The latest sanctions come after Pyongyang said earlier this month that it had successfully tested its first hydrogen bomb and had successfully loaded it on to a missile that could have the power to reach the US. Monday night’s vote on a fresh set of sanctions follows a week of behind-the-scene negotiations as the security council members sought to find agreement ahead of the vote.

Speaking after the vote, US ambassador to the UN Nikki Haley said that the sanctions were “by far the strongest measures ever imposed” on the regime. “This will cut deep,” she said. “They give us a much better chance to halt the regime’s ability to fuel and finance its nuclear and missile programmes.”