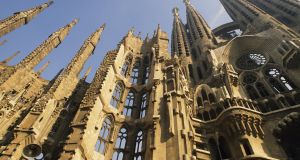 Police had evacuated the famous church and nearby businesses in an anti-terrorism operation amid suspicions over a van parked near the church.

A bomb squad was also sent to check the van.

A spokesman with the Mossos d’Esquadra regional police said two occupants spotted in the van had raised the alarm, but the bomb squad did not find any explosives in the vehicle.

He said several streets had been cordoned off as police worked in the area.

Barcelona, a tourism hub in northeast Spain’s Catalonia region, and a nearby coastal town were targets of extremist attacks that killed 16 people last month. The so-called Islamic State group claimed the attacks.

Spain has kept its anti-terrorism security warning one level below the maximum since mid-2015.