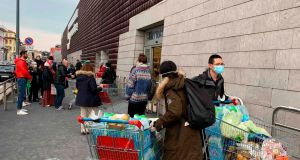 Shoppers in protective masks leave a supermarket with trolleys full of shopping in Milan on Sunday. Photograph: Getty

Italy ordered a virtual lockdown across a swathe of its northern region on Sunday, including the financial capital Milan, in a drastic attempt to contain the coronavirus outbreak there.

The death toll has risen by 133 to 366, the Civil Protection Agency said, by far the largest daily rise since the contagion came to light last month.

“We have to limit the spread of the virus and prevent our hospitals from being overwhelmed,” he told a news conference early on Sunday.

The restrictions aim to limit gatherings and curb movement. They will affect some 16 million people and remain in force until April 3rd.

The measures direct people not to enter or leave Lombardy, Italy’s richest region, as well as 14 provinces in four other regions, including the cities Venice, Modena, Parma, Piacenza, Reggio Emilia and Rimini.

Only people with proven, work-related reasons or health problems will be able to move in and out of exclusion zones.

Italy has been hit harder by the crisis than anywhere else in Europe. The number of coronavirus cases jumped 25 per cent in a 24-hour period to 7,375, while deaths climbed almost 60 per cent. It was the largest daily increase to date for both readings.

Antonio Pesenti, head of the Lombardy regional crisis response unit, told the Corriere della Sera newspaper the health system there was “a step away from collapse” as intensive-care facilities came under growing strain from new cases.

“We’re now being forced to set up intensive care treatment in corridors . . . to make space for seriously sick people,” he said.

The World Health Organization said it fully supported the actions taken by Italy, which were in line with its guidelines for containing the spread of the virus.

There was some confusion about what controls there would be from today on shops, offices and factories. But all museums, gyms, cultural centres, ski resorts and swimming pools in the targeted zones will close.

Restaurants and bars will be allowed to open from 5am to 6pm Irish time and only if they can guarantee that customers are at least 1m apart.

Masses and church services were also cancelled in the region.

Pope Francis delivered his Sunday blessing over the internet from inside the Vatican instead of from a window to stop crowds gathering in St Peter’s Square to see him.

Global coronavirus infections topped 107,000 and 3,600 have died, according to a tally of government announcements. China has suffered at least 3,097 deaths.

The spread continues to slow in China. According to China’s National Health Commission, cases fell by roughly half on Saturday from the day before. Of the 44 new confirmed cases, 41 were discovered in Wuhan, the origin of the virus’ outbreak. Chinese cities are gradually relaxing quarantine measures put in place over a month ago.

Separately, 10 people died and 23 remained trapped on Sunday after the collapse of a hotel that was being used to quarantine people under observation for the coronavirus in the Chinese city of Quanzhou, authorities said. More than 70 people were believed to have been initially trapped in the seven-storey building, which collapsed on Saturday evening.

A rescue force of over 1,000 people, including firefighters, police forces, and other emergency responders, arrived at the site on Saturday night, authorities said.

Infections continue to mount globally. Nineteen people in France have died, said authorities while confirmed cases increased by about 500 over the weekend.

Germany had 902 confirmed cases by Sunday afternoon while the number in Britain had risen to 273, according to the department of health, up from 209 a day earlier.

A patient diagnosed with coronavirus died in Argentina on Saturday, marking the first death related to the virus in Latin America.

Paraguay has registered its first confirmed case of coronavirus, the health ministry indicated on Saturday.

In the Middle East and Africa, infections also continue to rise.

Iran said 194 people had died and 6,566 were now infected, while Cameroon and Togo confirmed their first cases of the virus on Friday – bringing the number of countries in sub-Saharan Africa reporting infections to five.

In Australia, a man in his 80s died in a Sydney hospital, becoming the third casualty in Australia, state health authorities said.

Bangladesh confirmed its first three cases, two of them in people recently returned from Italy. – Reuters