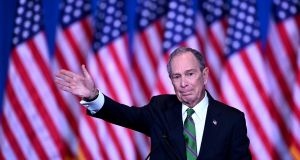 Joe Biden’s path to the Democratic nomination received an enormous boost on Wednesday after former New York mayor Michael Bloomberg dropped out of the race and threw his support and resources behind his one-time rival.

Mr Bloomberg announced his decision on Wednesday morning, after a poor performance on Super Tuesday, when he won only one territory – the tiny island of American Samoa.

“I’m a believer in using data to inform decisions,” he said. “After yesterday’s results, the delegate math has become virtually impossible – and a viable path to the nomination no longer exists.”

He immediately announced he was endorsing Mr Biden, who swept to victory in 10 states in the Super Tuesday contests.

“I’ve always believed that defeating Donald Trump starts with uniting behind the candidate with the best shot to do it,” the billionaire businessman said, praising Mr Biden’s “decency, his honesty, and his commitment to the issues that are so important to our country – including gun safety, health care, climate change, and good jobs.”

Mr Biden, who had spoken to Mr Bloomberg earlier by phone, immediately accepted his endorsement on Twitter. “This race is bigger than candidates and bigger than politics. It’s about defeating Donald Trump, and with your help, we’re gonna do it,” he wrote.

The developments followed a stunning performance by on Tuesday by Mr Biden, who won a string of states, cementing his status as the main rival to Bernie Sanders.

While final results were yet to be reported in California – the state with the most number of state delegates – Mr Biden could surpass Mr Sanders’s delegate count when the final results are in.

Three months ago, I entered the race to defeat Donald Trump. Today, I'm leaving for the same reason. Defeating Trump starts with uniting behind the candidate with the best shot to do it. It's clear that is my friend and a great American, @JoeBiden. pic.twitter.com/cNJDIQHS75

Signs that a Biden surge was in the offing were evident within minutes of the polls closing. The former vice-president clocked up early victories in Virginia, North Carolina and Alabama, replicating his game-changing performance in South Carolina on Saturday when he surged to victory on the back of strong African-American support.

Though the race was more competitive in states like Tennessee and Arkansas, a broad swathe of southern states were soon called for Mr Biden. His victory in Texas was a major win, given the state’s size and importance in the race.

Mr Sanders won his home state of Vermont, as well as Colorado and Utah, while he was expected to win California, with exit polls showing that more than half of Latino voters endorsed him.

In a measure of the breadth of Mr Biden’s support, there were also some surprise wins, such as in Minnesota, where he had been trailing in the polls. Though Mr Biden evidently benefited from Minnesota native Amy Klobuchar’s decision to drop out and endorse him, Mr Sanders had been widely expected to clinch the state, given his strong polling in the Minneapolis area and beyond.

Similarly, Mr Biden had not been expected to win Massachusetts, where Mr Sanders and Elizabeth Warren – the senator for the state – had been leading in polls. Instead, Mr Biden won the New England state, pushing Mr Sanders and Ms Warren into second and third place respectively.

In a speech to supporters in Los Angeles, a jubilant Mr Biden thanked his supporters.

“They don’t call it Super Tuesday for nothing,” he said to cheers. “Those who have been knocked down, counted out, left behind – this is your campaign. Just a few days ago the press and the pundits declared the campaign dead. And then came South Carolina. And they had something to say about it.”

He continued: “We were told: ‘Well, when you got to Super Tuesday, it would be over.’ Well, it may be over for the other guy,” he said, following with a quote from Seamus Heaney.

Mr Sanders showed no signs of pulling back from his campaign.

“Tonight I tell you with absolute confidence we’re going to win the Democratic nomination,” he said to supporters in Vermont on Tuesday night, though he won his home state by a much smaller margin than in 2016. “We are going to defeat the most dangerous president in the history of this country.”

He also made coded references to Mr Biden, highlighting his decision to vote for the Iraq war and his support for Nafta, the North American Free Trade Agreement of the 1990s.

The veteran senator, who narrowly lost the party’s nomination to Hillary Clinton in 2016, launched new ads on Wednesday, including one which highlighted his links with former president Barack Obama.

The Super Tuesday results also raised serious questions about the future of the Warren campaign. The senator has failed to win a single state, and her third-place finish in Massachusetts and fourth-place finish in her native Oklahoma were seen as significant blows.

In an email to supporters on Wednesday, Ms Warren’s campaign manager said she was reassessing her path forward after a “disappointing” Super Tuesday.

1 Dig for remains of Red Hugh O’Donnell finds skull and coffins
2 Miriam Lord: Leo’s Phoenix pecs just a storm in a bag of cans
3 Leaving Cert: Teachers advised to ‘destroy’ documents relating to students’ grades
4 Archaeologists are ‘quite sure’ they have found Red Hugh O’Donnell’s burial place
5 ‘I will be alone for rest of my life,’ says woman raped as she slept
Real news has value SUBSCRIBE