‘Maintain social distancing’: How does that work in Coppers?

Young clubgoers in Dublin express few fears about coronavirus, although business is down 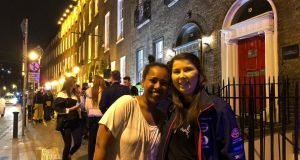 It is late on Friday night and queues are forming outside the string of nightclubs on Dublin’s Harcourt Street. Groups of friends chatter loudly and finish the last of their beer cans before going in.

The HSE’s advice is clear: “Maintain social distancing, ie leave at least 1m (3ft) distance between yourself and other people, particularly those who are coughing, sneezing . . . Avoid touching your eyes, nose and mouth . . . Wash your hands frequently.”

That’s all good in theory but how does it work among revellers in Copper Face Jacks?

The popular venue made a joke Instagram post on Thursday calling itself a “No shift zone” in the midst of the coronavirus scare. The club said: “Could you all just fist bump or something until this all blows over?”

“I think it’s serious but we’re still getting on with our lives and enjoying hanging out with our friends,” says clubgoer Daniel Vaz, who is originally from Lisbon and has been living in Dublin for five years. “We take some precautions but we don’t want to be isolated at home.”

Next door, in Dicey’s, people are continuing to party, as usual, and in the packed smoking area, there are plenty of hugs and kisses going around.

Dubliner John Cochrane is “using a lot more hand sanitiser” but apart from that, he isn’t worried at all. “I think fear is a much bigger problem, but maybe that’s just me. I don’t mind if I get it, it’s my dad I’d be worried about because it could kill him.

“I’m going to Paris next week for the rugby game and I’m not going to call that off over fear. It’s probably an Irish thing – everyone who asks me about it, I’m like, ‘Ah, it’ll be grand’.”

His friend, Kevin Gannon, is on the same page. “Life goes on, you know? I’m going about things as if the whole thing doesn’t exist. I’m washing my hands a bit more and having about three showers a day – a new high for me – but you just have to get on with it.”

Despite the nonchalant attitude of customers, Rangan Arulchelvan, managing director of the Russell Court Hotel – which houses Krystle nightclub, Bond nightclub and Dicey’s pub – said his business “definitely started to feel the hit” since last Thursday, with numbers down over 50 per cent.

“You can usually guarantee 80 per cent in your target but this was a big drop. We had to send staff home. We don’t know how it’s going to go in the next couple of weeks but we’ve been monitoring the situation and we hired an extra medic last week. We have masks and sanitiser and he’ll be able to do temperature checks.”

Seán O’Scinéir, one of the medics on-site in Dicey’s, said “extra vigilance” was needed. “You’d be foolish to think people won’t transmit or come in with symptoms... so we have to be ready.”

A few minutes pass in the women’s bathroom and about two-thirds stop to wash their hands, but none of them follows the HSE advice of “at least 15 seconds”, or the step-by-step instructions to rub the top of your hands, between your fingers and under your fingernails. Why is that?

“To be honest, I don’t give a f**k about the coronavirus,” one girl says on her way out.

Meanwhile, a queue forms outside the Bond club. It’s a similar story from Almaz Monsálvez (19), who is originally from Spain and moved here last year.

“I’m not worried about the coronavirus and I’m not changing my behaviour. If I have to die, I’ll die, but I’m not going to worry – that’s wasting time. This virus hasn’t changed anything I do because I don’t want it to.”

Her friend Kacey (24) chimes in: “I do think it’s sad, but I’m not afraid . . . It’s going to pass by and people will forget about it until another thing comes along. I’m a genuinely hygienic person anyway. I work in a waitressing job and wash my hands about 15 times a day.”

Nobody at the Harcourt Street clubs seems to have a problem with the Government’s decision to allow the St Patrick’s Day festival go ahead, despite it being strongly criticised by some doctors. According to Mr Arulchelvan, the only concerns clubgoers have expressed thus far are about the possibility of venues closing next weekend.

John Paul Cosgrave (20) from Monaghan is representative of this relaxed approach. Enjoying his night in Dicey’s, he says he is “a bit concerned” but that he has “kind of just got a laid-back attitude about the whole thing. There’s no point in worrying unless I get it.”