Brazilians critical of their government's ambiguous response to a surging coronavirus pandemic dug 100 graves and stuck black crosses in the sand of Rio's Copacabana beach in a tribute to the nearly 40,000 people who have died so far. Video: Reuters 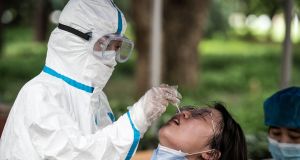 A university graduate being tested for coronavirus before entering campus to receive her graduation certificate at Huazhong University of Science and Technology in Wuhan in China’s central Hubei province on Thursday. Photograph: AFP/Getty Images/China OUT

More than 7.5 million people have been reported infected with the novel

coronavirus around the world and more than 421,400 have died, according to data compiled by Johns Hopkins University. Here are the latest updates on the pandemic from around the world:

Brazil reported a cumulative total of 802,828 confirmed cases of coronavirus on Thursday, with 30,412 new infections in the last 24 hours in the world’s second worst outbreak after the United States. With another 1,239 fatalities, the death toll in Brazil has reached 40,919, the health ministry said, the world’s third highest after the United States and Britain. Of the total cases of Covid-19, 345,595 have recovered, the ministry said. On Thursday, Brazilian shoppers lined up for hours and crowded into malls as they reopened on Thursday in the country’s two largest cities. In Rio de Janeiro, malls opened a week earlier than planned as businesses starved of income pushed authorities to lift restrictions even as public health experts warned it was too early to avoid a resurgence of contagion. In Rio and Sao Paulo, shopping malls required masks and took people’s temperature. Shops limited access to 20 per cent of capacity and provided alcohol hand disinfectant for shoppers. Parking was also limited to 20 per cent of car spaces. Cinemas in the malls were not allowed to open yet and eateries in food plazas could only sell meals for delivery. President Jair Bolsonaro has downplayed the gravity of the virus and pushed local authorities to lift quarantine measures.

India’s coronavirus infections have surged to overtake the number of recorded cases in the UK, making it the world’s fourth-worst affected nation.

India recorded 297,535 infections by Friday, compared to the UK’s 292,860 tally, according to data collated by Johns Hopkins University. After burgeoning infections in May and June, India now trails only the US, Brazil and Russia. Failure to ramp up testing and identify infection hotspots in spite of a stringent nationwide lockdown has cost the South Asian nation, which ranked 154 out of 195 countries in global healthcare access and quality even before the virus. The country with 50 per cent population below 25 years of age, has recorded higher recovery rates and lower deaths, ranking it below Canada, according to the Johns Hopkins University data. Fears of a sharper rise in daily infections increased after India eased its national lockdown on June 8th. The nation of 1.3 billion people has restarted inter-state flights and opened cities to buttress a sinking economy that has left businesses broken and impoverished millions.

Covid-19 cases across the country, especially in large cities struggling with shortages of hospital beds and ventilators that include the financial nerve centre Mumbai and capital New Delhi, are expected to peak in July. The capital may need 80,000 additional beds to manage an expected surge of more than half a million infections by next month-end.

Coronavirus cases in the US increased by 22,317 on Thursday from the same time Wednesday to 2.01 million, according to data collected by Johns Hopkins University. The 1.1 per cent increase matched the daily average over the past seven days. Deaths rose 0.9 per cent to 113,407. New York will let five upstate regions resume indoor dining as infection rates remain low, while fewer New York City workers than expected returned to their jobs as the city began reopening. Florida said new coronavirus cases rose faster than the weekly average. About half a dozen states including Texas and Arizona are grappling with a rising number of coronavirus patients filling hospital beds, fanning concerns that the reopening of the US economy may spark a second wave of infections. From apple packing houses in Washington state to farm workers in Florida and a California county known as “the world’s salad bowl,” outbreaks of the coronavirus are emerging at US fruit and vegetable farms and packing plants.

The spread of the coronavirus in Africa is accelerating, the World Health Organisation said, with total cases reaching 200,000 less than three weeks after the first 100,000, a milestone reached in 98 days. The continent accounts for less than 5 per cent of global cases. Deaths exceed 5,600, the WHO said. More than 70 per cent are in five countries: Algeria, Egypt, Nigeria, South Africa and Sudan. South Africa has a quarter of all fatalities, the WHO said.

In Germany, there were 169 new cases in the 24 hours through Thursday morning, bringing the total to 186,691 according to data from Johns Hopkins University. That compares with almost 7,000 at the peak of the pandemic in late March. Fatalities increased by 20 to a total of 8,772. The daily death toll has remained well below 100 since mid-May. The reproduction factor of the virus, known as R-naught, was at 0.88 on Thursday, compared with 0.86 the day before, according to a daily report by the Robert Koch Institute. The government is trying to keep the figure below 1.0 to prevent exponential growth in the number of cases and a second wave of infections. The R-0 number represents the course of infection approximately one to two weeks ago and is sensitive to short-term changes, such as local outbreaks, especially if the number of new cases is relatively low, according to the health institute.

The government’s plan to distribute personal protective equipment (PPE) during the coronavirus pandemic was undermined because officials failed to stockpile gowns and visors despite warnings to do so, Whitehall’s spending watchdog has revealed. The report published on Friday by the National Audit Office (NAO) said this meant less than half of the expected pieces of certain equipment were handed out to frontline workers as the crisis developed. The only categories of PPE that increased in volume in the government’s stockpile between January 24th and February 21st, when ministers were acutely aware of the pandemic in China, were aprons and clinical waste bags. Health unions and senior MPs have been deeply concerned by the NAO findings, which also confirmed that 25,000 hospital patients were discharged to care homes at the height of the pandemic before testing became routine. About 300 UK health workers have so far died of Covid-19, and many NHS staff groups and families claim inadequate PPE played a key role in exposing them. On Thursday, the department of health said 41,279 people had died in hospitals, care homes and the wider community after testing positive for coronavirus in the UK as of 5pm on Wednesday, up by 151 from 41,128 the day before. The government figures do not include all deaths involving Covid-19 across the UK, which is thought to have passed 52,000.

China has reported the first local coronavirus transmission in Beijing in weeks as the country’s capital gradually reopens due to a sharp decline in new cases. Six other new cases were Chinese citizens arriving from abroad, the National Health Commission said in its daily report. No new deaths were reported and 65 people remain in treatment, while another 104 are in isolation being monitored after having tested positive for the virus while showing no symptoms. One other person was listed as a suspected case after displaying other signs they may be infected. China has reported 4,634 deaths from Covid-19 — a figure that has been static for weeks — among 83,064 total cases since the virus was first detected in the central Chinese industrial city of Wuhan. Local authorities said the Beijing case is a 52-year-old man who went to a clinic with an intermittent fever but no other symptoms. He was swiftly diagnosed as having coronavirus, prompting authorities to isolate to family members and reinstate anti-virus measures in his neighbourhood.

Australia has eliminated the novel coronavirus in many parts of the country, its chief medical officer said on Friday, clearing the way for sports fans to soon return to stadiums and for foreign students to prepare to fly back to classes. Australia recorded just 38 cases of the coronavirus over the past week, with travellers returning from overseas and already in quarantine accounting for more than half of them, said chief medical officer Brendan Murphy. “We have effectively achieved elimination at this time in many parts of the country,” Mr Murphy told reporters. Prime minister Scott Morrison last month announced a three-step plan to remove most lockdown measures by July. But with case numbers falling significantly, Mr Morrison said restrictions on indoor gatherings would be loosened in July with crowds of up 10,000 people allowed in seated stadiums and a trial scheme to allow foreign students to return. Details for students were being finalised but they would require quarantine, he said. The return of international students would be a boost for universities facing big financial losses with the border closed.

Thailand will lift a nationwide curfew and ease more restrictions next week, a spokesman for its coronavirus task force said on Friday, after the country has reported no local transmissions of the virus for 18 days. Thailand is also planning to reopen to foreign visitors by creating so-called travel bubbles with countries that have also managed to contain the virus, though no target date was set, said Taweesin Wisanuyothin, a spokesman for the Centre for COVID-19 Situation Administration. “The curfew will be lifted effective on June 15 along with the easing of some activities,” Taweesin said, adding that strict social distancing rules still needed to be observed in all public activities. –PA, Reuters, Guardian, Bloomberg