Ireland has racism problem but not police brutality, says Taoiseach

A Black Lives Matter protest has taken place at the US Embassy in Dublin organised by Black Pride Ireland, MERJ (Migrants and Ethnic Minorities) and MASI (Movement of Asylum Seekers For Ireland). Video: Bryan O’Brien 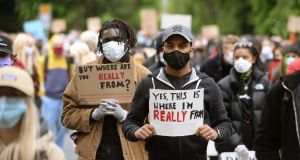 Demonstrators at the Black Lives Matter protest outside the US embassy on June 6th. Photograph: Dara Mac Dónaill/The Irish Times

Taoiseach Leo Varadkar has said he thinks Ireland has a racism problem but does not have police brutality problem.

Everyone was aware of how Travellers were spoken about, the told RTÉ radio on Wednesday.

Growing up mixed race he was aware of how people perceived anyone who looked or sounded different or had a different surname, the Taoiseach said.

This had not held him back, Mr Varadkar said, adding it had “pushed me on”.

The Taoiseach said he was worried that young people of colour were being treated as if they were not fully Irish.

A private school in south Dublin recently opened a review into allegations from past and current pupils. St Columba’s College, a boarding and day school for Irish and international student, received the complaints last week.

The killing of George Floyd, a black man who died under the knee of a white police officer in the United States, has roused worldwide protests against racial injustice and police brutality.

Campaigns like the Black Lives Matter and the Me Too movements had highlighted how important it was to identify the racists, Mr Varadkar said. “There are lots of things we can do.”

There was a need for an anti-racist campaign and new legislation to combat hate speech and hate crimes, Mr Varadkar said. Measures had already been taken such as recognising the ethnicity of Travellers and it was now “easier to become an Irish citizen”.

Mr Varadkar said that growing up his heroes had been soccer player Paul McGrath and rock star Phil Lynott, noting both were of mixed race but also undeniably Irish. “They were icons, having those role models was very important,” he told 2fm Breakfast with Doireann and Eoghan.

When asked whether statues of Cromwell in the United Kingdom should be taken down, he said that there were some statues in Ireland “that we need to talk about” such as the statue in Fairview Park “to a Nazi sympathiser”.

In the United Kingdom, protesters in Bristol tore down the statue of Edward Colston, the philanthropist who made his money from a company that shipped slaves to America, and threw it in the river.

In London, the statue of 18th century slave owner Robert Milligan was removed from its place in the docklands.

Last week, Mr Varadkar said Ireland needs to learn from the failings of countries like Britain and the United States when it comes to race relations. US president Donald Trump could have had “a better response” to the killing of Mr Floyd, Mr Varadkar said.

On June 6th, hundreds of protesters gathered at the US embassy in Ballsbridge in Dublin on Saturday in support of the Black Lives Matter movement, in the aftermath of the death of Mr Floyd in Minneapolis.

An earlier Black Lives Matter protest in Dublinon June 1st drew between 2,000 and 4,000 people, according to gardaí. It attracted criticism due to a lack of social distancing during the Covid-19 lockdown.

Fallout from Mr Floyd’s death, and reaction to a spate of arson and looting that accompanied some of the otherwise mostly peaceful protests, also plunged US president Donald Trump into one of the biggest crises of his tenure.

Mr Trump repeatedly threatened to order the military onto the streets to quell protests, focusing on restoring order while saying little about the US racial wounds at the root of the upheavals.

1 Officials refuse to rule out ‘Midlands lockdown’ following Covid-19 surge
2 Covid-19: Public sector workers at home may be asked to foster children
3 Masks Q&A: Who has to wear them in shops and what happens if you don’t?
4 Ireland's 'R number' of almost 2 a 'serious concern' as number of new cases jumps
5 How a ship abandoned by its owner brought deadly cargo to Beirut
Real news has value SUBSCRIBE