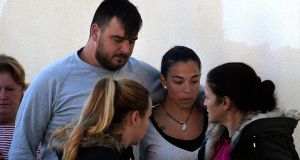 Jose Rosello and Victoria Garcia, the parents of the two-year-old boy found after falling into a deep borehole near Málaga. Photograph: Gregorio Marrero/AP

Spanish investigators are examining the circumstances surrounding the death of a two-year-old boy whose body was recovered from a borehole nearly two weeks after he fell down it.

Julen Roselló Jiménez fell into the 110m deep hole on January 13th, while on a day out in the countryside with his family in Totalán, near Málaga. The dimensions of the borehole, which was only 25cm in diameter, made the boy’s rescue extremely difficult.

His body was eventually found in the early hours of Saturday morning, after rescuers had excavated a shaft into the ground parallel to the borehole and then dug across to where the boy was, sometimes using explosives to remove particularly hard rock.

The position of Julen’s body suggested that he had fallen feet first and died when he hit compacted earth 71 metres down, the spot from where his body was recovered.

“It was an obstacle course which the mountain put before us,” said the Spanish government’s representative in Andalucía, Alfonso Rodríguez Gómez de Celis of the difficulties the rescue attempt faced. “It was as if the mountain was defending itself.”

On Sunday, Julen was buried in his home town of El Palo.

Investigators are now trying to find out why the borehole was not covered. Antonio Sánchez, the businessman who dug it, told Spanish media that he sealed the hole and that it must have been opened up afterwards.

Such boreholes, which are often used to look for water, are common in southern Spain and there are concerns that many of them are not properly sealed or lack the necessary permits.

Investigators are also hoping to confirm why there was so much rubble in the borehole, both beneath the boy, preventing him from falling to the bottom, as well on top of him, hampering the rescue attempt.

Mr Rodríguez Gómez de Celis said it is possible that earth came loose from the sides of the hole as Julen was falling and that some of it ended up covering him.

Spain was on tenterhooks throughout the search for Julen, which involved 300 people, including the fire services, the civil guard, miners, technicians and psychologists, who offered support to the family. The effort, in which several months’ worth of excavation and engineering were carried out in a matter of days, has been widely praised. On Saturday, locals applauded the team of Asturian miners who carried out the final section of the dig as they left Totalán.

Nicolás Rando, a civil guard who was present when Julen’s body was found, told Diario Sur newspaper that he had felt “a certain relief” when the rescue finished, although he was “furious” at the outcome. “He wasn’t alive, that’s the worst thing,” he said. “But we gave everything.”

Spanish media reported that Julen’s parents also lost their three-year-old son Oliver in 2017, after he died from a heart defect.