May urges party to support move for alternative to backstop 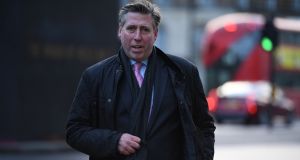 British prime minister Theresa May on Monday asked her party to support a proposal which calls for the Northern Irish backstop in her Brexit deal with Brussels to be replaced with alternative arrangements.

Conservative Party chairman Brandon Lewis confirmed the move after Mrs May addressed her party colleagues at a private meeting in parliament.

Politicians will on Tuesday debate and vote on Mrs May’s next steps, after the overwhelming rejection of her Brexit plan earlier this month, and have been proposing amendments seeking to shape the future direction of Brexit. Some of the amendments seek to avert a no-deal departure and others attempt to water down the backstop.

The backstop is an insurance policy aimed at avoiding a hard border in Ireland in the absence of a future trade deal between the EU and the UK. It would keep the UK in a common customs area with the EU in the event of a no-deal Brexit.

Mr Lewis said Mrs May told her MPs that they should vote in favour of an amendment, proposed by senior Conservative lawmaker Sir Graham Brady, which calls for the backstop to be replaced with “alternative arrangements”.

“It allows the PM to give a very clear message about what the parliament wants and where the party is,” Mr Lewis said.

The European Union has ruled out renegotiating the principle behind the backstop. Its deputy chief negotiator Sabine Weyand said on Monday that the bloc was “open to alternative arrangements” on the Irish Border but that the problem with Sir Graham’s proposal was that it did not spell out what they were.

She also said if and when EU leaders discuss delaying Brexit by agreeing to extend negotiations, they “will require certain elements of information . . . and one of them is the purpose of extension”.

“They would want to be reassured about that at the end of the extension there will be clarity,” she said. “The idea of going into serial extensions is not very popular on the EU side.”

Ms Weyand also said she was unsure the UK would be able to handle the consequences of leaving the EU without a deal.

She said a no-deal Brexit would be “the most costly version of Brexit for everyone concerned but we [the EU] also think we can handle it. I’m less sure about the UK side.”

Strong support for Sir Graham’s amendment – if it is put to a vote on Tuesday – will allow Mrs May to demonstrate to the EU that changes to the backstop could be enough to allow her to get parliamentary approval for a deal.

But the chairman of the European Research Group, Jacob Rees-Mogg, said that its members, thought to number at least 60, would not support the scheme.

Mr Rees-Mogg said the group would not support any amendment, but would decide on the day whether to abstain or vote against. MPs in the ERG were concerned that the amendment did not spell out what would replace the backstop and did not specify that changes to the text of the withdrawal agreement were required, he said.

It will be down to speaker John Bercow which amendments are selected for a vote on Tuesday.

On Sunday, Minister for Foreign Affairs Simon Coveney said there would be no change to the backstop.

Mr Coveney said the backstop was already a compromise and a review mechanism had already been stitched into it.

However, The Irish Times reported on Monday morning that the Government would be willing to renegotiate the withdrawal agreement if the UK wanted to stay in a permanent customs union with the EU or allowed Northern Irish specific measures to avoid a hard border. – Agencies

Brazil’s president Jair Bolsonaro says he has tested positive for Covid-19 16:40
The music from the temple was ‘Lebanon does not want to die’ 16:26
HIV patient in remission offers hope to millions living with virus 16:15
Ex-Kasabian singer Tom Meighan avoids jail for assaulting former fiancee 15:29
Allegations Johnny Depp is a ‘wife beater’ are complete lies, court told 13:20