A Disney-style $200 million (175,000,000 euro) Turkish luxury development is in doubt after investors have pulled out of the project leaving hundreds of abandonded chateaux. Video: Prestige Life Real Estate 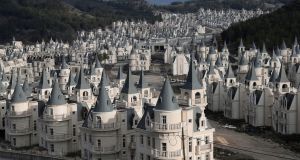 Drone footage of an eerie abandoned urban development of mini castles in Turkey has shone a light on the troubles facing the country’s economy.

The future of the 300 closely packed chateaux – which cost an estimated €174 million to build – is now uncertain, and the dystopian sight has become a cautionary tale for other developers in Turkey’s debt-laden construction sector.

Work began on Burj al Babas in 2014, with units primarily designed as holiday homes for wealthy Gulf tourists. The town plans were also supposed to include Turkish baths and an entertainment complex.

Only a handful of the €436,000 Disney castle style homes were sold, however, and several investors have since pulled out, Mezher Yerdelen, deputy chair of the Sarot Property Group, told Agence France-Presse.

The construction project has long been hated by Mudurnu locals, who say it is not in keeping with the area’s traditional architecture, characterised by Byzantine buildings, traditional Ottoman wooden houses and a 600-year-old mosque.

Since Burj al Babas got the go-ahead, the Turkish government has introduced new building regulations designed to preserve local character and heritage: in several places, housing developments must now be low-rise and fit in with existing neighbourhoods.

But it may be too late to undo some of the damage, said Yasar Adnan Adanali, an Istanbul-based urban development researcher.

“I worry that projects like Burj al Babas opened Pandora’s box, in some respects,” he said. “Developments without proper planning that do not contextualise the geography and history of their surroundings have exploded in Turkey since.”

The Turkish president, Recep Tayyip Erdogan, has encouraged a construction boom during his time in office, hailing large, job-heavy infrastructure projects as the engine of the Turkish economy.

However, the weakening Turkish lira has left many companies struggling to pay off the foreign currency debt borrowed to finance projects, stalling work and bankrupting companies. The collapsing construction bubble has resulted in half-finished high-rises and ghost towns all over the country.

“It’s not just the homebuilders who go bankrupt. The people who supply goods to those industries – the architects, the technicians, the glass and steel makers – those people suffer too,” he said.

Despite no indications Turkey’s economic woes will reverse in the near future, Sarot Group is still hopeful Gulf investors will return to Turkey and Burj al Babas will be finished.

“We only need to sell 100 villas to pay off our debt,” said Yerdelen. “I believe we can get over this crisis in four to five months and partially inaugurate the project in 2019.” – Guardian