Germany marks 30 years since fall of the Berlin Wall

Merkel and other European leaders attending ceremony on Saturday 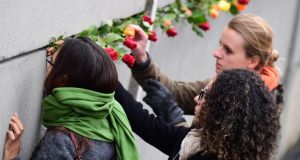 Young women place roses into a gap of the hinterland wall during the celebrations of the 30th anniversary of the fall of the Berlin Wall. Photograph: Clemans Bilan/EPA

Germany is marking 30 years since the Berlin Wall fell, a pivotal moment in the events that brought down Communism in eastern Europe.

Leaders from Germany and other European nations are attending ceremonies on Saturday in Berlin recalling the peaceful protests that piled pressure on East Germany’s government to allow its citizens free passage to the west on November 9th, 1989.

The main commemoration is being held at Bernauer Strasse, where one of the last parts of the wall that divided the city for 28 years still stands.

Light installations, concerts and public debates are also being held throughout the city and other parts of Germany to mark the anniversary.

Read about how Eva Röser found herself trying to escape from East Berlin, hidden in a Lotus Seven Sports car.

Derek Scally writes about the quiet remembrance of the Berlin Wall that will take place on the “death strip”.

“A permanent state of schizophrenia” – what it was like to grow up in East Germany.

How 30 years after the fall of the wall, a united Berlin is still in search of its true soul.

Diarmaid Ferriter writes that nostalgia for East Germany is not surprising.

David McWilliams says that Ireland was the big winner from the fall of the Berlin Wall.

The Berlin Wall anniversary sparks a thaw in the artistic cold war as many writers, actors and singers sank without trace in the united Germany.