US Wrap: president calls on Joe and Hunter Biden to testify in impeachment inquiry 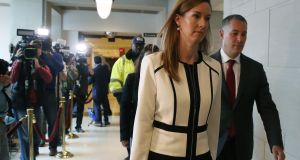 US president Donald Trump has been ordered to pay $2 million to charity after a judge ruled that the president improperly used his Trump Foundation to fund his 2016 election campaign. The case, brought by the New York state attorney general against Mr Trump and three of his children last year, alleged there was “persistently illegal conduct” at the Trump Foundation. The charity was shut down last year. In a seven-page ruling, Justice Saliann Scarpulla said that money that had been donated to a fundraiser in January 2016 in Iowa had been used to further Mr Trump’s political campaign.

New York’s attorney general Letitia James described the court’s decision as a “major victory” in its efforts “to protect charitable assets and hold accountable those who would abuse charities for personal gain”.

In a statement, a spokesman for the Trump Foundation said it was pleased to donate the sum to worthy organisations, but criticised the “politically motivated lawsuit”.

The ruling, which appeared to draw an end to the lawsuit, emerged as House Democrats continued to question witnesses behind closed doors as part of the ongoing impeachment inquiry into Mr Trump’s dealings with Ukraine. Jennifer Williams, a national security advisor to vice-president Mike Pence, testified on Thursday. She was one of the officials who listened in to the controversial phone call between Mr Trump and Ukrainian president Volodymr Zelenskiy in July which has become the focus of the impeachment inquiry.

As House Democrats prepare for the next, public stage in the impeachment inquiry which begins next week, the head of the House Intelligence Committee, Adam Schiff, wrote to Republicans, inviting them to recommend witnesses to testify. However, he warned that the witnesses must be relevant to the inquiry.

What did Hunter Biden do for the money?...He and Sleepy Joe must testify!

“The Minority’s witness request must be submitted in writing, and must be accompanied by a detailed written justification of the relevance to the inquiry of the testimony of each requested witness,” he wrote in the letter to the top Republican on the committee, Devin Nunes. As both parties prepare for next week’s first public testimonies, there were reports that Republicans were considering replacing Mr Nunes with Ohio congressman Jim Jordan, a vocal ally of Mr Trump.

Meanwhile, Mr Trump suggested on Twitter on Thursday that both Democratic presidential candidate Joe Biden and his son Hunter should testify before the committees leading the inquiry. Retweeting a post from a Republican senator, he wrote: “What did Hunter Biden do for the money?...He and Sleepy Joe must testify!”

A reconstruction of the July phone call between Mr Trump and his Ukrainian counterpart revealed that the president urged Mr Zelenskiy to investigate Burisma, an energy company which retained Hunter Biden on its board while his father was US vice-president.

On Thursday, House Democrats leading the investigation released the latest bulk of documents related to the inquiry, publishing the transcript of testimony given by George Kent, a senior diplomat in the State Department. In his deposition, Mr Kent said he raised concerns about Mr Trump’s personal lawyer Rudy Giuliani’s contacts with Ukraine as early as March. He also criticised Mr Giuliani’s attacks against Marie Yovanovitch, the US ambassador in Kiev who was recalled early to Washington by the Trump administration this year. His “assertions and allegations against former ambassador Yovanovitch were without basis, untrue, period,” Mr Kent said, according to his testimony.