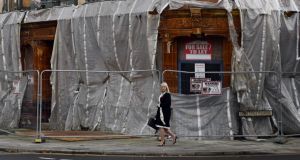 A pedestrian passes a dilapidated building in Hartlepool, northeast England. It is one of the 10 poorest places in England, with more than one in five people living in “income-deprived households”. Photograph: Getty Images

It is cold, wet and windy in Shildon, a small town outside Bishop Auckland in County Durham, and Labour MP Helen Goodman is getting ready to meet her team for one of three daily door-knocking sessions. With a Labour majority of 502, Bishop Auckland is a top Conservative target in next month’s election, and if Goodman holds it Boris Johnson is unlikely to win the majority he needs to stay in Downing Street.

A Remain-voting advocate of a second Brexit referendum in a constituency that voted Leave in 2016, Goodman faces a set of challenges shared by Labour MPs across the northeast of England. The tribal loyalty to the party in this former coalmining region is fraying amid economic, social and demographic change.

“You see the edge of that small old terrace of houses there?” Goodman says. “Once upon a time you could go down a street like that and everybody would be a Labour vote. But now Labour voters live on new estates and in social housing.

“And the occupants of those little terraced houses, some of them are traditional Labour people. Some of them might be young people for whom it’s their first house and they’re moving on.

“They don’t put down roots, and you have higher levels of crime and drug dealing in that housing, and it spoils the streets and it spoils those neighbourhoods, but it also means that those people are not on the register. They’re not voting.”

Goodman says her campaign is much better organised than in 2017, and she has more help from outside the constituency to fight off the Conservative threat.

Half of the voters she meets on the doorsteps complain about parliament’s failure to deliver Brexit and about Jeremy Corbyn’s leadership. But she says many others are “more enthusiastic for a Labour government than I have ever known them” because of the impact of almost a decade of austerity.

In the neighbouring constituency of Sedgefield, Phil Wilson is defending a majority of 6,059 in a seat he has held since Tony Blair stood down in 2007. Almost 60 per cent of his constituents voted Leave, but Wilson is campaigning for a second referendum, warning that Brexit could have a worse impact on the northeast than on other parts of Britain.

“I’ve just got to take a principled position on this, which is that I don’t think Brexit is a good idea,” he says.

The son of a miner, Wilson grew up in the area and went to the local comprehensive school, working as a shop assistant before getting a clerical job in the civil service without going to university.

He believes the loosening of the bond between Labour and some of its traditional supporters predates Brexit, reflecting the economic and social changes that followed the mine closures of the 1970s and 1980s.

“When I was growing up virtually every man on my street worked down the road in the colliery, and now that’s all changed. And what people did, not just work but their lifestyles, the way they lived, were all something they had in common because they all did the same thing. And that’s now obviously started to fracture as local communities are starting to atomise. And we’ve got to find a way of dealing with that.

“We’ve got to find a rhetoric that matches up to that. But I think when you go down to it, they may be having some doubts about Labour but that doesn’t mean to say they’re going to the Tory party. There’s a strong sort of tradition here that you don’t vote Conservative.”

Deborah Azzouzi, who moved to Sedgefield last year, is not constrained by such traditions, and she is wavering between the Conservatives and the Brexit Party, partly because of Wilson’s stand on Brexit.

“He has completely ridden roughshod over what the local people want. We are a very, very strong Brexit constituency, and his view is that he will do what he thinks is best for our constituency, not what the constituents think.”

I met Azzouzi in Hartlepool on Monday, where she came to hear Nigel Farage announce that he was standing down the Brexit Party’s candidates in 317 constituencies the Conservatives won in 2017.

Hartlepool is one of a handful of constituencies in the country where the Brexit Party has a chance of winning a seat, with party chairman Richard Tice as its candidate.

Ukip won 28 per cent of the vote here in 2015, coming within about 3,000 votes of taking the seat from Labour, and Hartlepool backed Brexit a year later by a margin of more than two to one. In September, a group of independents on the local council joined the Brexit Party, forming an alliance with the Conservatives to take control.

Once an important centre for steel and shipbuilding and a busy port for the coal industry, Hartlepool has been in decline since the early 1960s and it still has one of the highest unemployment rates in the country at 8.3 per cent.

It is one of the 10 poorest places in England, with more than one in five people (and more than 28 per cent of children) living in “income-deprived households”, according a report in September by Britain’s ministry of housing, communities and local government.

Leo Gillen, a local businessman who owns a number of pubs in the town, puts Labour’s troubles in Hartlepool down to poor leadership and splits within the party since Peter Mandelson stepped down as MP in 2004 to become a European commissioner. Although Mandelson was, like Blair in neighbouring Sedgefield, an outsider with no prior links to the area, he cultivated the constituency and was returned with huge majorities at successive elections.

“He was very visible in the town. And that’s why the town backed him very heavily and stood by him. They understood that he was fighting for the town,” Gillen said.

“Peter would shop in Tesco very slowly on a Saturday afternoon so his constituents would say that he was there. And then he would eat out in one of the busy restaurants in the town, the Marina in Church Street which was the place to eat at the time.”

Gillen acknowledges, however, that although Hartlepool saw more spending on hospitals and schools it failed to benefit in terms of investment from the boom enjoyed elsewhere in Britain during the Blair years.

Gillen was himself the victim of the fraying of Hartlepool’s loyalty to Labour in 2002 when he stood as the party’s candidate for the newly-created post of directly-elected mayor.

Hartlepool United, the local football club, is known as the “Monkey Hangers” on account of a story of a monkey that was washed ashore in the early 19th century and hanged by locals who thought it was a French spy.

Stuart Drummond, who dressed in a giant monkey suit every Saturday as the club’s mascot H’Angus the Monkey, stood in the contest as a publicity stunt and defeated Gillen by 522 votes.

“It was poor organisation by the Labour Party. I didn’t get anyone to knock out the vote and I was promised,” Gillen said. “And it was also that Hartlepool were going in for a promotion and there were 4,500 fans at the games. And the spread of that is to the families. And all the kids got behind him. So it was a kick back against politics.”

Gillen believes the Brexit Party has a good chance of taking Hartlepool in next month’s general election as the strongest alternative to Labour. He says Johnson is “not disliked” locally, but he has not had long enough to establish himself as prime minister, and the Conservatives are lacking a proper infrastructure in the constituency to get out the vote.

“Labour’s got the union infrastructure. They have the feet on the ground to get the postal vote out. Union organisers pick them up and post them,” he said.

Apart from local anger over the party’s position on Brexit, Labour also faces resistance in Hartlepool on account of Corbyn, a leader Gillen describes as “a north London intellectual type” who is out of step with the working class in the northeast.

Gillen voted Leave in 2016 as a protest against David Cameron’s government and because he felt that Britain was not getting “a fair crack of the whip” in the EU. But as he watches the rift opening up between a London-based Labour leadership which is mostly Remain and parts of the party’s traditional heartland that voted Leave, he wishes Cameron had never asked the question about Europe in the first place.

“That disconnect is a dangerous disconnect to me for the Labour Party because you’re not doing the wishes of your party members in half the country. And this is the problem.

“Once Cameron took that vote to the country and split the country in two, it was dangerous and wrong. It was a stupid vote, and it’s been proven stupid, probably one of the greatest mistakes we’ve had in our political history.”