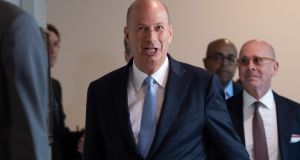 Gordon Sondland in Washington: The US ambassador to the EU said he told a top adviser to Ukraine’s president that US military aid would likely not be released until Kiev made clear it would investigate Joe Biden and his son’s ties to Ukraine energy firm Burisma. Photograph: Getty Images

A key ally of Donald Trump has given revised testimony to impeachment investigators admitting that Ukraine was told military aid would be withheld unless Kiev carried out investigations demanded by the US president.

The additional evidence by the US ambassador to the EU, Gordon Sondland, contradicts Mr Trump’s insistence that there was no quid pro quo involved in his request to Ukraine that it investigate the business activities in Ukraine of Hunter Biden, a son of Democratic former vice-president Joe Biden.

The admission was included in revised testimony Mr Sondland provided to the House of Representatives committees leading the impeachment inquiry, updating the initial testimony he gave on October 17th. The House committees in charge of the inquiry released both sets of testimonies on Tuesday.

At the heart of the inquiry is the “favour” sought by Mr Trump from his Ukrainian counterpart, Volodymyr Zelenskiy, in a phone call in July 25th, in which the president asked for an investigation into the Bidens.

Joe Biden is a frontrunner in the Democratic race to select a candidate to challenge Mr Trump for the presidency in next year’s election.

In his updated testimony provided to the committees leading the inquiry, Mr Sondland said he told a leading Ukrainian official that the country would not receive military aid if it did not open the investigations demanded by Mr Trump.

Mr Sondland said that he had discussed the matter with Andriy Yermak, an adviser to Mr Zelenskiy, on the sidelines of a September 1st meeting between vice-president Mike Pence and the Ukrainian president in Warsaw, just before Mr Pence’s visit to Ireland and Britain.

“I now recall speaking individually with Mr Yermak, where I said that resumption of the US aid would likely not occur until Ukraine provided the public anti-corruption statement that we had been discussing for many weeks,” Mr Sondland said.

The evidence is seen as particularly damaging to Mr Trump because Mr Sondland is a supporter of the president who was appointed US ambassador to the EU after contributing millions of dollars to Mr Trump’s election campaign.

The committees also released evidence from Kurt Volker, the former special envoy to Ukraine, who was the first witness to testify in the inquiry on October 3rd. His written testimony reveals that during a May 23rd meeting, Mr Trump was sceptical about a possible Oval Office meeting with Mr Zelenskiy which subsequently was used as leverage by the White House in its talks with Ukraine to open investigations.

Acting White House chief of staff Mick Mulvaney has been asked to testify this week as part of the impeachment inquiry – the most senior Trump official to date to be targeted by investigators.

In a letter sent to Mr Mulvaney on Tuesday, the heads of the House foreign affairs, oversight and intelligence committees requested him to appear on Friday.

Mr Mulvaney was centrally involved in the White House’s dealings with the Ukrainian government, the subject of the impeachment inquiry that began in September. The former congressman from South Carolina said last month in a press conference that there had been a quid pro quo involved when the Trump administration suspended promised military aid to Ukraine, though he later said his comments were misrepresented.

Mr Mulvaney is not expected to comply with the request. On Tuesday two more officials from the Trump administration did not show up at closed-door committee hearings despite being summoned to appear. The White House has ordered officials not to comply with requests to provide depositions to the inquiry, citing executive privilege.