Hungary sets up clash with EU after court system overhaul 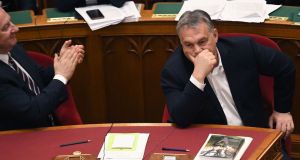 Hungary has set up a potential clash with Brussels and other EU member states after it passed a law to tighten its control over the judiciary during a chaotic final parliamentary session before Christmas.

The law will create a new court system, overseen by justice minister Laszlo Trocsanyi by January 2020, and removes the authority of Hungary’s supreme court on administrative matters including elections, taxation, police and public institutions. It can also rule on matters regarding protests, strikes, construction permits and data privacy.

“This gives the justice minister so much power to appoint, promote and discipline judges that it paves the way for a clear interference,” said Marta Pardavi, of the Hungarian Helsinki Committee, a legal NGO. She added that the government should have waited for an opinion from the Venice Commission, the Council of Europe’s legal advisory arm, which said it would not be able to issue recommendations until the spring.

The new court was approved easily thanks to the two-thirds majority won by prime minister Viktor Orban’s Fidesz party in April, along with another controversial bill to increase the overtime hours companies could ask employees to work, from 250 hours to 400 hours per year, that detractors have dubbed a “ slavery law”.

The government has said that “public administration courts will be filled with independent judges solely governed by the word of the law” and that the new system would “lead to more rapid rulings, which benefits citizens” and eases the workload of Hungary’s supreme court.

Zoltan Kovács, spokesman for the Hungarian government, denounced the scenes of protest in parliament from opposition politicians, who blew whistles, blared sirens and blocked speaker Laszlo Kover from taking his seat. “This is the last resort of our domestic opposition that they make trouble in parliament,” he told reporters in Brussels. “It’s a shame what they do.” The opposition contends that the manner in which the vote was held violated the procedural rules.

Critics say that since coming to power for the second time in 2010, Mr Orban has bent the law to his will to accumulate power, substantially amending the constitution seven times since 2012.

This change is the most important since Mr Orban won a third successive election victory in April, which he said gave him a mandate to “build a new era”.

“This constitutes an occupation of the judicial system, which up until now has been relatively independent,” said Peter Kreko, of the Budapest-based Political Capital think-tank. “It was the last independent element of the Hungarian legal and institutional system and now it is occupied as well.”

Mr Kreko said the new court system could increase political risk for companies, as the administrative courts “with strong pro-governmental leanings” can rule on disputes between the state and companies.

The European Commission is likely to take a close interest in the latest law change, which follows clashes with Poland and Romania over their own legal system overhauls. Hungary already faces a so-called “Article 7” disciplinary process, in which other EU member states will decide whether the country has breached the bloc’s fundamental values.

This week EU countries began to set the ground rules for what could be a bitter battle in the new year over how to deal with Budapest. Some member states are highly critical of Hungary over matters such as departure from Budapest of the central European University, founded by billionaire philanthropist George Soros, which has been at odds with Mr Orban’s government for several years. But Budapest also has allies among fellow central European states.

Mr Kovács insisted the proposed judicial system changes were consistent with both EU rules and practices in some other countries in the bloc.