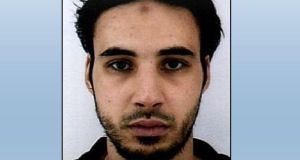 French authorities were continuing to search on Wednesday night for Cherif Chekatt, the 29-year-old Frenchman suspected of having murdered two people and seriously wounding 16 others in Strasbourg.

Police issued a photo of Chekatt as their search continued.

The gunman opened fire outside the city’s Christmas market at about 8pm on Tuesday, shooting at three different groups of people in the minutes that followed.

The two people killed in the attack included a 45-year-old man who had invited his family for a drink in the Stub restaurant. The victim went outside while his wife and son went to the toilet. The gunman shot him and then ran into an adjacent street. The man died before help arrived.

The second man killed was a 45-year-old Thai tourist who was shot in the head. He and his wife had arrived in France the previous day and were to have travelled to Paris on Thursday.

A third victim, an Afghan car mechanic who was a practising Muslim, was repported to be brain dead.

Four of those wounded were attacked with a knife.

The injured include two musicians in their 20s who were playing in the Savons d’Hélène bar-restaurant, a male customer in the same bar, and two journalists, one Italian and one French, who were covering the European Parliament session for Europhonica, a network of radio stations run by various associations.

After the attack the suspect wounded a soldier in the hand in an exchange of fire with a “Sentinelle” anti-terrorist army patrol. Police spotted him walking in the dark and shone a torch in his face. In the course of a second exchange of fire, he commandeered a taxi. The driver said he dropped the gunman off in the Neudorf neighbourhood, and that he was wounded in the arm.

Nearly 700 members of the security forces and two helicopters are involved in the manhunt. The border was closed, but deputy interior minister Laurent Nunez said Chekatt may have fled to Germany.

Chekatt was born in Strasbourg and has 27 criminal convictions, mostly in France but also in Germany and Switzerland. The Alliance police union said he had “the typical profile of a criminal from the sensitive [mostly immigrant] quarters”.

Interior minister Christophe Castaner said Chekatt became a criminal at age 10 and was convicted for the first time at age 13. He was released from a German prison in 2017 and expelled to France. His name appears on the FSPRT list of suspected Islamist radicals, kept by French intelligence.

Chekatt frequented a bar in Neudorf which was closed several months ago on suspicion of laundering money used to finance terrorism, France Info radio reported.

Gendarmes made a failed attempt to arrest Chekatt on Tuesday morning in connection with a robbery in August in which several men broke into a home and critically wounded the person living there. A search of Chekatt’s apartment turned up a defence grenade, a loaded rifle and four knives.

Nunez said five people close to Chekatt, including family members, have been arrested.

Fine Gael MEP Mairéad McGuinness, who is vice-president of the European Parliament, tweeted photographs and descriptions from her office, where she was forced to spend Tuesday night because of the security lockdown.

The attacks have become a political issue, with the right-wing and extreme right-wing leaders Laurent Wauquiez and Marine Le Pen demanding that all 10,000 people on watchlists of suspected Islamists be incarcerated.

Websites used by the gilets jaunes or yellow vests, who have been demonstrating and in some cases rioting for the past month, accused the government or French intelligence of organising the attacks to distract attention from their movement.