If May loses, Brexit could be delayed or even abandoned

Analysis: It seems if May wins tonight’s vote by any margin, she will stay put

Theresa May faces a vote of confidence in her leadership of the Conservative Party With less than four months left until the United Kingdom is due to exit the EU. Video: Reuters 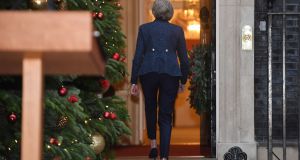 UK prime minister Theresa May walks back to number 10 after making a statement in Downing Street. Photograph: Stefan Rousseau/PA Wire

Theresa May’s defiant statement outside 10 Downing Street, promising to fight “with everything I’ve got” to keep her job, set out the case she will make to Conservative MPs ahead of tonight’s confidence vote.

A leadership election now would mean that her successor would not be in place until at least the middle of January, too late to renegotiate the Brexit deal in time for a parliamentary deadline of January 21st.

This could mean extending the Article 50 negotiating deadline so that Britain would not leave the European Union as planned on March 29th. Delaying Brexit could mean abandoning it, she warned, if Parliament takes control of the process and triggers a second referendum.

Hardline Brexiteers within the European Research Group (ERG) failed last month to win the support of the 48 MPs needed to call a confidence vote. May’s decision to postpone the vote on her Brexit deal changed the arithmetic, prompting more Brexiteers and some Remainers to conclude that she lacked the authority to deliver a Brexit deal that can win a majority in Parliament.

If May wins tonight, she is immune from a challenge to her leadership for 12 months, a factor that could play against her in tonight’s ballot. Many MPs who declined to move against her by triggering a confidence vote would, none the less, like her to leave office shortly after Britain leaves the EU at the end of March. And Conservatives are united in their determination that they should not go into another general election under her leadership.

The ERG’s leaders have deployed the DUP against the prime minister, warning that the unionist party will withdraw its support from the government unless the Conservatives choose a new leader. For their part, the DUP have long been plotting to remove May and her defeat tonight would help to burnish their reputation for ruthlessness at Westminster.

For the ERG, May’s successor must be a Brexiteer and if she loses, the group will stage a mini-hustings to choose a candidate - probably Boris Johnson, Dominic Raab or David Davis. MPs choose two candidates who then go before the broader party membership and the Brexiteers fear that splitting their vote could allow two former Remainers to go forward to the final contest.

Within the cabinet, home secretary Sajid Javid and foreign secretary Jeremy Hunt are former Remainers who have swung behind Brexit since the referendum. Both publicly expressed support for the prime minister this morning, along with other ministers with leadership ambitions.

May’s opponents need 158 votes to topple her and some of them acknowledge that they will struggle to reach that number. That’s why Brexiteers have this morning suggested that, if the prime minister fails to win the vote by a wide margin, she will have to step down.

They point to the precedent of Margaret Thatcher in 1990, when she won 204 votes to Michael Heseltine’s 152 but was forced to resign. But five years later, when a third of Conservative MPs voted against John Major in his “back me or sack me” confidence vote, he remained in office.

If the prime minister’s statement outside Downing Street this morning is anything to go by, if she wins tonight’s vote by any margin, she will stay put.