Hungary and Poland give no ground in row with the EU 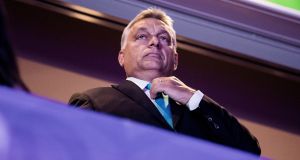 Hungary and Poland are refusing to give ground in disputes with the European Union that have deepened divisions in the bloc and exposed disagreement among central European states over future relations with Brussels.

Having faced strong EU criticism for his anti-immigration policies since the height of Europe’s refugee crisis in 2015, Hungarian prime minister Viktor Orbán has now asked Brussels to pay half the bill for security fences that he erected along his country’s southern borders.

Poland, meanwhile, has accused the deputy head of the European Commission, Frans Timmermans, of meddling in its affairs by urging a rethink of judicial reform that the EU fears will severely undermine the country’s rule of law.

Mr Orbán intends to write to the European Commission to request payment of some €400 million towards his country’s frontier fences and other security measures, which are “protecting all the citizens of Europe from the flood of illegal migrants”, according to the Hungarian leader’s chief of staff, Janos Lazar.

Hungary has been accused of acting selfishly in refusing to take a quota of refugees, but Mr Lazar said that “if we talk about European solidarity, then we must also discuss the protection of borders. Solidarity must be applicable there, too.”

European Commission spokesman Alexander Winterstein said on Friday that solidarity “is not some sort of an a la carte menu where you pick one dish, for example border management, while refusing another dish, like ... relocation [of refugees]. The commission will use every instrument at its disposal when the separation of powers is at risk.”

That was a reference to possible suspension of Poland’s EU voting rights over the issue, but that would require approval from all member states, and Hungary has pledged to block any such effort.

Polish foreign minister Witold Waszczykowski said Mr Timmermans “had decided to go beyond the prerogatives ... of an international bureaucrat from a European institution and start a political debate, political actions against Poland.”

As Hungary and Poland reject prospects for deeper EU integration, however, top Czech, Slovak and Romanian officials have indicated in recent weeks that their countries want to remain close to a “core” of major euro zone powers, led by Germany and France, and be part of their discussion on the future of the bloc.