Refugees in Libya being tortured and denied care, says charity 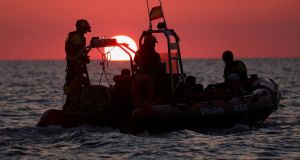 The torture and ill-treatment of refugees and migrants who are being “stripped of any human dignity” in Libyan detention centres must end, Médecins Sans Frontières has said.

The humanitarian organisation, which says its medics are treating more than 1,000 detainees a month, has appealed for an end to the arbitrary detention of asylum seekers in Tripoli. It has accused the government there of detaining people in centres where they suffer ill-treatment, lack access to medical care and that fall far short of international safety standards.

Doctors working on board the charity’s rescue vessels in the Mediterranean say they provide care on a daily basis for women and men with injuries caused by torture and abuse in these centres. Detainees in Libya are also presenting with skin diseases, urinary tract infections, respiratory tract infections and acute watery diarrhoea, which doctors say have been caused or aggravated by the conditions inside centres.

Political instability and violent clashes in Libya are making it difficult for doctors to provide treatment to patients in the centres, while frequent changes in management make it nearly impossible to negotiate the release of patients for medical care, the charity has said.

The organisation’s medical adviser, Dr Sibylle Sang, said: “We see on a daily basis how detention is causing harm and unnecessary suffering. It is directly linked to the majority of the physical and mental health problems our doctors are treating.”

Dr Sang said increased funding from Europe to the Libyan government would not alleviate the suffering experienced by people inside the detention centres.

“A narrow focus on improving conditions of detention while excluding the current realities facing Libya today risks legitimising and perpetrating a system where people are detained arbitrarily without recourse to the law and are exposed to harm and exploitation.”

The leaders of France, Germany, Italy, Spain, Chad, Niger and Libya met in Paris earlier this week to agree a plan to tackle illegal human trafficking and to support nations struggling to contain the flow of people across the desert and Mediterranean sea.

They committed to setting up “facilities with adequate humanitarian standards” for asylum seekers stranded in Libya.

Last month an Irish doctor working with Médecins Sans Frontières in the Mediterranean called on Irish naval vessels carrying out search-and-rescue operations not to support efforts to return refugees and migrants to these Libyan detention centres.

Dr Conor Kenny, who spent three months working on board a search-and-rescue vessel, urged European leaders to open safe and legal routes for refugees and migrants crossing the Mediterranean.

“I haven’t been to Libya but these people’s stories are corroborated in rescue upon rescue,” Dr Kenny told The Irish Times. It’s clear these abuses are happening. Many are beaten in detention centres and some are shot. They say they would rather die at sea than go back to Libya.”

A total of 123,950 men, women and children have crossed the sea to reach Spain, Italy, Greece and Cyprus so far this year, while an estimated 2,421 have died or gone missing on the journey.