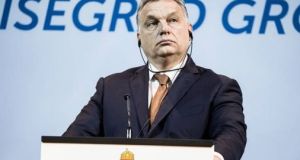 Russian president Vladimir Putin will visit Hungary on Monday, making his second trip this year to one of the few European Union countries where he is still given a warm welcome despite the deep chill in East-West relations.

His meeting with Hungarian prime minister Viktor Orban will be their eighth in total, and their fourth in the last two years, as they strengthen ties in defiance of fierce criticism on several fronts from the EU and major member states.

Mr Putin, a famous “judoka”, is also expected to attend the opening ceremony of the judo world championships in Budapest, and to receive a university honour for championing a major nuclear power project between Russia and Hungary.

The symbolism of his visit is likely to be its most striking element, however. It comes as the populist Mr Orban looks increasingly marginalised in the EU, Mr Putin faces continued isolation over Russia’s aggression against Ukraine, and both men’s hopes for a major boost from US president Donald Trump have been dashed.

For Mr Orban, the visit will sound a warning to his critics in Berlin, Paris and Brussels that he could shun them and look to the Kremlin in times of need; for Mr Putin, a day of judo, honours and diplomacy beside the Danube will go a little way to counter impressions at home and abroad that Russia is becoming a pariah state.

The mood was very different when Mr Putin flew into Budapest in February. Mr Trump had just taken power and wanted to repair relations with Moscow, after an election victory that Mr Orban called a “historic event” which gave “the western world the chance to free itself from the captivity of ideologies, of political correctness”.

Ahead of the winter meeting, government spokesman Zoltan Kovacs told The Irish Times that Hungary backed and hoped to benefit from a rapprochement between US and Russian leaders who share Mr Orban’s “illiberal” outlook.

“If there will be a positive shift in the dialogue between Moscow and Washington, European partners will perhaps be easier to convince to follow suit,” Mr Kovacs said. “Hungary seeks to be one of the pillars of the re-establishment of European-Russian relations.”

Sick of being chided by the EU for attacking Hungary’s democracy and civil society, Mr Orban sought to eschew talk of shared values in favour of the more “transactional” relations propounded by Mr Trump and fully amenable to energy-rich Russia.

“If the EU fails to engage in a pragmatic dialogue with Moscow it stands to lose a great deal,” Mr Kovacs said, complaining that sanctions against Russia over its undeclared war in Ukraine had by that time cost Hungary €6.07 billion in lost export revenue. “Sanctions are not effective and are clearly harmful,” he added.

Six months on, however, the EU and US have only tightened their sanctions, Mr Trump and allies are enmeshed in a web of allegations over Kremlin ties, and the Pentagon reportedly wants to start supplying deadly weapons to Ukraine’s military.

After lauding Mr Trump during his campaign, Russian state media are now awkwardly backtracking while blaming his travails on a “deep state” conspiracy of the secret services, the Clintons and various other covert actors, including in some versions the Hungarian-American billionaire George Soros, a liberal philanthropist loathed by the US alt-right and by Mr Orban and his followers.

The Hungarian leader’s hopes for the year have also fizzled: while watching Mr Trump struggle noisily to assert himself, he has seen fellow Eurosceptics suffer election defeat in France and the Netherlands and make little headway in Germany.

Having lambasted German chancellor Angela Merkel’s handling of the refugee crisis, Mr Orban now faces the prospect of her being re-elected and having another advocate for deeper EU integration in new French president Emmanuel Macron.

Mr Macron pointedly did not meet Hungarian or likeminded Polish leaders during a tour of central Europe last week, during which he outlined a vision of an EU based on shared liberal values and co-operation that is anathema to Mr Orban.

He may be more comfortable discussing energy plans with Mr Putin, although a Hungarian opposition party intends to protest everywhere the Russian leader goes during his day in Budapest.