A complex web of conflicting agendas in the fight against Isis

Confusion and uncertainty reign as political, ethnic and hidden agendas play out 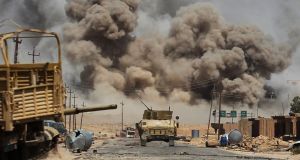 Politics impinges on all fronts in the campaign to oust Islamic State from Lebanon, Syria and Iraq. All parties involved have their own agendas, which are not complementary or compatible, creating confusion and uncertainty.

US air action preventing the transfer of Islamic State fighters from northern Lebanon to eastern Syria is a glaring example of the impact of politics on the conduct of the campaign. The air strikes constituted a show of force rather than deterrent action. They temporarily blocked the route taken by the buses carrying 308 fighters and 331 relatives after a safe-passage deal had been agreed by the Lebanese army in exchange for the withdrawal of Islamic State fighters from their last redoubt in Lebanon.

Although eastern Syria had been announced as the destination of the convoy before its departure, opposition was not expressed until it reached eastern Syria. Iraq, an ally of Damascus – had approved the transfer – and the US protested, since the destination was the town of Abu Kamal on the Syria-Iraq border. The convoy has resumed its journey.

Baghdad and Washington feared the jihadis would join Islamic State fighters who are still in control of pockets of Iraqi territory. However, the small number of fighters would not provide serious reinforcements. Iraqi prime minister Haider al-Abadi said that “we fight the terrorists in Iraq – we do not send them to Syria”, ignoring the scores of jihadis who have fled Iraq for Deir al-Zor province in eastern Syria.

A second example reveals how politics can determine the order of battle. Shia militias rather than Iraqi army units were deployed in the offensive by Iraqi forces against Islamic State in the strategic town of Tal Afar, which was declared “liberated” by Abadi on Thursday. This deployment was made because inhabitants of the town are mainly Shia Turkomen (ethnic Turks), who may not risk abuse and death at the hands of fellow Shias.

During the offensive against Mosul, a Sunni city, Shia fighters were restricted to outlying districts, and elite army and police units were used. Sunnis were tortured and killed when Shia militiamen entered other Sunni cities held by Islamic State.

The politics of the battle for Islamic State’s Syrian headquarters in Raqqa, a third example, involves ethnic rather than sectarian considerations. The US has compelled the reluctant Kurdish-dominated Syrian Democratic Forces to take on jihadis in Raqqa, an Arab city well south of the Kurdish-controlled stretch of territory along the Syrian-Turkish border.

To avoid antagonising Raqqa’s Arabs, the Kurds have pledged to allow local leaders to establish an administration similar to counterparts in the Kurdish zone.

The Kurds are awkward allies for the US. Unlike Washington, they do not call for the downfall of the regime but seek a decentralised, unified Syria. In 2015 Damascus indicated it could recognise Kurdish autonomy. Kurdish forces and the Syrian army have co-operated in battles against jihadis north of Aleppo and elsewhere.

The fourth example involves deception. Turkey has deployed troops and tanks in Iraq and Syria on the pretext of fighting Islamic State while its real objective is to curb the political ambitions of the Kurds in these countries. In Iraq the Turks have created an Arab militia for eventual use against Kurds seeking to expand their autonomous region by annexing territory along the border as well as in the oil-rich Kirkuk province.

Annexation could lead to war with Baghdad, pitting two US partners against each other.

Turkish troops and allied Syrian jihadi groups have also crossed into Syria with the aim of containing the Kurds and preventing them from holding a wide swathe of contiguous territory on the Syrian side of the border. Ankara fears the creation of Kurdish entities in Iraq and Syria will lead its Kurds, 20 per cent of Turkey’s population, to escalate their fight for autonomy or independence.

Finally, external powers have not yet taken a political decision to end the Syrian war. Damascus’s key allies, Moscow and Tehran, have achieved their objective, preservation of the regime, but the western and Arab regime-change camp has not conceded defeat.

Furthermore, due to conflicting agendas and the lack of consultation among governments ranged against Islamic State, there appears to be no serious planning for the day when its fighters surrender in their hundreds and, perhaps, thousands.

US envoy Brett McGurk has said, “Irreconcilable Isis terrorists should be killed on the battlefield”, but this may not be an option for governments claiming to be more humane than cruel and brutal Islamic State.