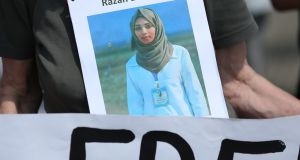 Razan al-Najar, the Palestinian nurse reportedly killed by Israeli soldiers recently, in an image worn at a demonstration in Berlin prior to the arrival of Israeli prime minister Binyamin Netanyahu. Photograph: Sean Gallup/Getty

The Israeli military on Tuesday said an initial investigation found that the 21-year-old Palestinian woman medic shot dead during border clashes on Friday had not been intentionally targeted.

Gaza health officials and witnesses said Israeli forces shot dead Razan al-Najar, a volunteer medic, as she ran towards the border fence, east of the south Gaza town of Khan Younis, in a bid to reach a casualty last Friday. The Israeli military said Palestinian militants had attacked its troops along the border with gunfire and a grenade.

“An initial examination regarding the incident . . . found that a small number of bullets were fired . . . and that no shots were deliberately or directly aimed towards her,” part of a brief statement issued by the Israeli army said.

The investigation was continuing, the statement added, and findings will be examined by senior commanders and then passed to military prosecutors for consideration.

Palestinians protested on Tuesday to mark the 51st anniversary of the Naksa, or defeat, commemorating the Arab losses in the 1967 Six-Day War, when Israel captured the West Bank and east Jerusalem, Gaza, the Golan Heights and the Sinai peninsula.

With a larger protest planned for Friday, the last weekend of the holy month of Ramadan, Tuesday’s demonstrations were relatively subdued. Israeli troops arrested an unarmed Gaza resident who managed to infiltrate into Israel, and incendiary kites from Gaza caused at least 15 fires along the Israeli side of the border.

Israel has failed to come up with an answer to the spate of fires caused by kites and helium balloons from Gaza rigged with firebombs or burning rags which have become a feature of the Palestinian protests over the last few months. The fires have caused significant destruction, including €1.2 million in damage to farmers.

Firefighters, soldiers and local residents have worked on an almost daily basis to try to contain the fires in Israeli fields.

According to Israeli officials, since the start of the protests at the Gaza border, there have been more than 250 fires in the Gaza periphery, destroying some 4,300 acres of land, the majority of it in nature reserves and parks.

Defence minister Avigdor Lieberman said some 600 kites have been launched from Gaza, of which a third have reached Israel and started blazes. He vowed to stop the phenomenon.

“I don’t tend to leave an open account, and we will settle the score with Hamas, with Islamic Jihad and the other terrorists who act against us from Gaza,” he told the Knesset parliament.

“It is unthinkable that Hamas commanders are able to walk around freely and permit the incendiary kites to be flown.”

The army has beefed up its presence along the border, including snipers on the front line, and says it plans to continue its policy of shooting at anyone trying to reach the border fence. Since March 30th, when the weekly Friday protests began, about 130 Palestinians have been killed and thousands wounded.

Meanwhile, Israel says it will deduct from tax funds it collects for the Palestinian Authority to compensate the victims of the kite attacks.

Yair Lapid, head of the opposition Yesh Atid party, said residents of southern Israel were still suffering because the government had no long-term policy about what to do with Gaza. – Additional reporting, Reuters