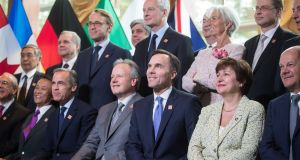 Group photo during the G7 finance ministers and central bank governors meeting in Canada on Friday: Donald Trump’s disdain for diplomatic niceties has created a rift with countries whose alliance with the US dates to the cold war. Photograph: Darryl Dyck/Bloomberg

Prime minister Justin Trudeau this week plays host to a summit of the Group of Seven leading industrialised nations with six of the seven members outraged at the United States over a slew of recent moves by President Donald Trump.

This year’s meeting is likely to be overshadowed by Trump’s planned summit with North Korean leader Kim Jong-un, tentatively scheduled for June 12th in Singapore, where Pyongyang’s nuclear programme is expected to be discussed.

Trudeau, who wants the June 8th-9th meeting to focus on economic growth, insists he can handle the challenge, though insiders and analysts say he will have to fight to keep the grouping together at a time when Trump’s trade and diplomatic moves have isolated the US and risk undermining the G7’s relevance.

“What this G7 is going to show is that the United States are alone against everyone and especially alone against their allies,” French finance minister Bruno Le Maire told reporters on Friday before a meeting of his counterparts in British Columbia.

Trump’s disdain for diplomatic niceties and his “America first” policies have created a rift with countries whose alliance with the US dates to the cold war with the Soviet Union.

Trump has infuriated Canada and European Union members of the G7 by imposing tariffs on steel and aluminum and pulling out of a deal to monitor Iran’s nuclear activities. Japan fears being sidelined in its own back yard as Washington seeks to improve ties with North Korea.

The three-day G7 finance ministers’ meeting, where the closest US allies vented anger over the Trump administration’s metal import tariffs, wrapped up on Saturday with a stern rebuke of Washington.

Trudeau played down the talk of divisions at the summit, in the Quebec town of La Malbaie. “These questions get asked every time,” Trudeau told Reuters in a May 24th interview. He said the G7 was “extraordinarily valuable because it’s an opportunity for like-minded nations to come together and talk about shared challenges”.

A spokesman for Trudeau said the prime minister’s position had not changed despite the tariffs.

University of Ottawa international affairs professor Roland Paris, who served as Trudeau’s first foreign policy adviser, has a less upbeat view. “The primary challenge for this summit is to maintain the integrity of the G7 itself,” he said.

While the most likely scenario was that the leaders gloss over their differences, he added, “there is the real possibility of a more open rupture”.

Heather Conley, a former US state department official now with the Centre for Strategic and International Studies in Washington, said the divisions on trade meant it would be hard for leaders to focus on the other issues.

“They’re either going to struggle through this and remain relevant to the management of the international system as it continues to evolve – or they’re not,” she said.

Trudeau and the EU condemned the steel and aluminium tariffs, and tempers will no doubt be high on June 8th when leaders hold a traditional discussion about trade.

“Obviously it has the potential to be much more robust this year,” said a senior Canadian government official, who conceded this year’s meeting would be charged. “Is it more challenging this time than before? Yes, but everyone is showing up,” said the official, who requested anonymity given the sensitivity of the situation.

At the G7, Trump will defend his insistence on “fair and reciprocal trade”, said a White House National Security Council official, speaking on condition of anonymity.

Trump economic adviser Larry Kudlow described the tensions over trade as a family quarrel. “This thing can work out. I’m the optimist,” he told reporters on Friday. – Reuters