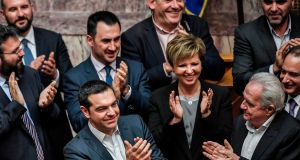 Greek prime minister Alexis Tsipras and members of his government applaud after winning a confidence vote in the parliament in Athens on Wednesday. Photograph: Louisa Gouliamaki/AFP/Getty Images

Greek prime minister Alexis Tsipras narrowly won a confidence vote in parliament on Wednesday, clearing a major hurdle for Greece’s approval of an accord to end a dispute over Macedonia’s name.

The single-vote majority secured by Mr Tsipras also averted the prospect of a snap election.

Mr Tsipras called the confidence motion after his right-wing coalition partner Panos Kammenos quit the government on January 13th in protest over the name deal signed between Athens and Skopje last year.

Parliament gave Mr Tsipras 151 votes, meeting the threshold required in the 300-member assembly. His leftist Syriza party has 145 seats in parliament while additional support was gleaned by defectors of Mr Kammenos’s Anel party and independents gave him six more votes.

Prior to the vote, he had called on deputies “with hand on heart” to “give a vote of confidence to the government which gave battle, which bled, but managed to haul the country out of memorandums and surveillance”.

This was a reference to Greece’s international lenders, who kept the country on a tight leash for years.

Greek opponents of the agreement say Macedonia’s new name – the Republic of North Macedonia – reached after decades of dispute between Athens and Skopje, represents an attempt to appropriate Greek identity.

Macedonia is the name of Greece’s biggest northern region. The deal was signed between the two countries in mid-2018, contingent on ratification of parliaments in both countries.

The deal is a necessary step for Macedonia to be considered for European Union and Nato membership.

An early election in Greece could have delayed reform implementation, privatisations and Greece’s efforts to return to bond markets. Mr Tsipras’ party is trailing by up to 12 points behind the main conservative New Democracy party, which opposed the Macedonia deal.

Last Friday Macedonia’s parliament passed an amendment to its constitution on Friday to rename the country Republic of North Macedonia, in line with its agreement with Greece.

Eighty one deputies in the 120-seat parliament voted in favour. Representatives of the opposition party, VMRO-DPMNE, who opposed the agreement with Greece, boycotted the vote.

“A new historical chapter in our statehood has been written this evening,” the Macedonian government said in a statement. “It makes absolutely plausible two of our biggest state interests – membership in Nato and EU.” – Reuters