‘Some of us searched for weapons and were ready to fight’ 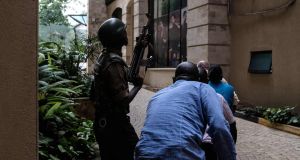 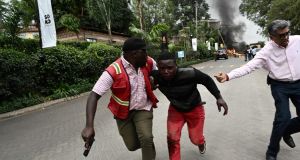 An injured man is evacuated from the scene of the explosion at a hotel complex in Nairobi’s Westlands suburb, on Tuesday. Photograph: Simon Maina/AFP/Getty Images

Predrag Amidzic was looking out his office window at the Dusit complex in Nairobi on Tuesday when a terrorist’s bomb was detonated in the courtyard below his fifth-floor workplace, outside a popular restaurant.

The managing director in East Africa for alcoholic beverage company Pernod Ricard said he initially thought that a gas explosion had occurred at the restaurant in the compound located in the Westlands district of the Kenyan capital, which houses the DusitD2 hotel as well as offices.

But when he started to hear gunfire he quickly realised the area was under attack. By Tuesday evening the Somalia-based militant group al-Shabaab had claimed responsibility for the assault that has so far claimed the lives of at least 15 people, including one US citizen.

“Once we knew we were under attack I gathered together the 20 people in our office and we started to organise ourselves: putting a barricade up against the office front door; securing the perimeters as best we could,” he told The Irish Times.

Bullets flew through the Pernod Ricard office window at one point, recalled Amidzic, so everyone lay down on the ground for protection. When Amidzic sneaked a look out the window at the blast area, he saw two bodies lying on the ground outside the restaurant, which left him in a cold sweat, he said.

“You start to think this could be it . . . all I wanted to do was to arm myself. Some of us searched for weapons like kitchen knives and were ready to fight. It is all you can do really in a situation like this,” said Amidzic, who was a solider during the Balkans war in the 1990s.

The 49-year-old from Montenegro lauded his colleagues’ bravery and how they handled the situation. He said that although everyone was scared during their two-hour ordeal because of the constant gunfire, people did what they could to calm and protect each other.

“After about two hours Kenyan security forces arrived at our office to rescue us, but we were unsure at first if they were legitimate or just the militants trying to get in.

“We got one of our Kenyan colleagues to talk to them in Swahili because he said he would know if they were Somalis by their response. Somalis don’t speak Swahili like Kenyans. When it became clear they were Kenyans we let them in and with their help made our escape,” he said.

Amidzic said on Wednesday he was trying to collect information on who had died in the attack, and so far he was aware that one of the valets he knew at the hotel was a confirmed casualty.

“In terms of our company we were very lucky. At lunch time there would often be between five and 10 Pernod Ricard staff eating at the restaurant that was targeted, but it happened shortly after 2pm so all had returned to the office,” he said.

Amidzic concluded that the security forces who responded to the attack acted swiftly and should be commended for their bravery and efforts to limit the causalities.

“Despite the fear it was a relief to see the security forces take control. It’s good to know there are people here able to react swiftly to this sort of situation.”

1 Church closes its doors after flouting public health rules
2 All students will not return to school even if social distancing rules are relaxed - McHugh
3 Emily Maitlis thanks BBC viewers for support after Cummings row
4 ‘Stick to the guidelines’ - People warned not to gather in crowds as sunny weekend approaches
5 Miriam Lord: Taoiseach is trapped in a Zoom session from hell
Real news has value SUBSCRIBE