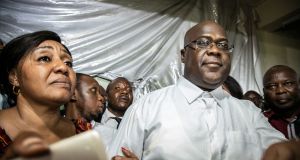 Felix Tshisekedi in Kinshasha with his wife, relatives and supporters a few minutes after he was declared winner of Congo’s presidential election on Friday. Photograph: Caroline Thirion/AFP/Getty Images

The powerful Catholic church in the Democratic Republic of Congo has challenged the published result of last month’s historic election, setting the clerics on a collision course with President Joseph Kabila’s outgoing regime and increasing the likelihood of a confrontation.

The church, which runs the country’s biggest election observation mission, said the results announced in the early hours of Thursday that gave opposition leader Felix Tshisekedi victory did not match the results gathered by its 40,000 observers.

“The results of the presidential election published by the [electoral commission] do not correspond to the figures collected by our observation mission from the voting stations and counting centres,” said Fr Donatien Nshole, vice-president of the bishop’s conference known as Cenco.

Last week Cenco briefed diplomats that rival opposition candidate Martin Fayulu had an unassailable lead and publicly called on the electoral commission, or Ceni, widely believed to be aligned with the government, not to distort the results.

The allegations by the church, one of the country’s most respected institutions, of vote rigging have called into question what could have been a historic moment for Congo – the country has never had a transfer of power via the ballot box – and set the scene for potential clashes between security forces and Mr Fayulu’s supporters.

Even before the Cenco announcement, as hundreds of Mr Tshisekedi’s followers celebrated at his party’s headquarters until the early hours, Mr Fayulu slammed the result as a sham cooked up by Mr Kabila’s ruling coalition and Mr Tshisekedi’s rival opposition campaign.

“These results have nothing to do with the truth of the ballot boxes” Mr Fayulu said. “The announcement is the fruit of tampered results invented and fabricated in their entirety in the obscure offices of the [ruling coalition]” he said.

Jean-Yves Le Drian, French foreign minister, appeared to echo Mr Fayulu’s claim. “We must have clarity on these results, which are the opposite to what we expected,” Mr Le Drian told French television on Thursday morning, according to Reuters. “The Catholic church of Congo did its tally and announced completely different results.”

The electoral commission announced on Thursday that Mr Tshisekedi had won the election with approximately 39 per cent of the vote, defeating Mr Fayulu, who finished second, and Emmanuel Ramazani Shadary, Mr Kabila’s candidate.

Mr Tshisekedi is the son of Etienne Tshisekedi, who founded the Union for Democracy and Social Progress in 1982 to oppose the rule of the dictator Mobutu Sese Seko. Mr Tshisekedi inherited the leadership of the UDPS when his father died in 2017, but its potent criticism of the Kabila regime softened under his leadership.

During the election campaign, Mr Tshisekedi called for calm as other opposition figures, including Mr Fayulu, criticised the government’s conduct. This week the UDPS said it had met with Mr Kabila’s representative to discuss a peaceful transition, stoking reports that the two sides had reached a deal to block Mr Fayulu from power.

Mr Kabila, who has been in office since 2001, finally agreed to step down in August but had hoped his ruling coalition would maintain power through a victory for his chosen successor, Mr Shadary, a former interior minister.

When that did not happen, analysts and former UDPS officials said Mr Kabila may have sought a deal with Mr Thsisekedi.

“The main objective of this electoral process is to keep the system in place,” said a former UDPS official who broke with the party over what he said was its increasing willingness to cut deals with Mr Kabila’s group. “If such a deal exists, Felix will get the title but not the power, Kabila will keep the security forces and the finances.

“It is [a] very, very dangerous game that is being played out, that is not in the interests of Congo and its people,” he added.

Spokespeople for Mr Tshisekedi and the UDPS could not be reached for comment on Thursday. Barnabe Kikaya, an adviser to Mr Kabila and Mr Shadary’s spokesperson, said the ruling party would make a statement later on Thursday.

A meeting of the UN Security Council on the Congolese election is planned for Friday. – Copyright The Financial Times Limited 2019