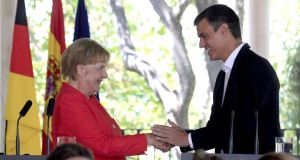 Chancellor Angela Merkel has returned from her summer holiday, picking up where she left off: demanding far-reaching reform of the EU’s so-called Dublin migration system, which she described as “dysfunctional”.

She was speaking on a weekend visit to southern Spain, after Madrid announced it would take back within 48 hours migrants registered in its system detained on the German-Austrian border.

With Berlin still seeking similar agreements with Athens and Rome, Dr Merkel thanked the new Socialist prime minister, Pedro Sánchez, with a promise to assist his own efforts to tackle growing migration to Spain from Morocco.

That hinged in turn, she said, on a pan-EU agreement for fairer burden-sharing to distribute refugees and others with a right to stay in Europe.

“This is a common challenge for everyone – it can’t depend on the geographic location of a certain country,” said Dr Merkel, acknowledging that EU member states have “not yet found a solution”.

Though just 14km separates north Africa from the outer EU border in Spain, Mr Sánchez warned that a far greater gap exists between Europe and Africa on economics, human rights and political stability.

“The greater the gap the more travesties there will be in our Mediterranean waters,” he said, a nod to 1,500 people who have died so far this year in the Mediterranean Sea.

“Trying to close that gap of inequality must be one of our main goals in the present European Union. ”

The Spanish-German agreement is largely of a symbolic nature: in the last two months, no migrants from Spain have shown up on German borders.

But that could change, given Spain has overtaken Italy and Greece as the number one destination for asylum seekers entering Europe, accounting for about half of 63,000 arrivals logged by the UN refugee agency.

Dr Merkel insisted the bilateral agreement indicated a shared will of Germany and Spain to find “European solutions” to the refugee crisis.

Last month her Bavarian allies, facing an election in October, brought her coalition to the brink with threats of national measures to send back migrants at its border with Austria unless new EU agreements were struck.

The chancellor returned from an all-night EU summit with a political deal to shore up external European borders and create screening centres inside and outside the EU to expedite migrants’ asylum applications.

With pressure growing to present concrete measures, her interior minister, Horst Seehofer, has signalled he will present migrant return agreements this week with Italy and Austria. But both countries have populist parties in power and are cool on accepting additional migrants.

Another huge challenge remains over delivering the promised migrant processing centres in secure areas of northern Africa, given the lack of enthusiasm for such facilities in countries there.

Despite resistance from central European countries such as Poland and Hungary, a European Commission draft document says “long-term solutions” must be found for people in such facilities “who require international protection” – including the prospect of resettlement in Europe.

Some 20 member states including Ireland, have signed up to an existing EU programme, but just 4,300 of the forecast 50,000 people have been resettled.

In the medium term Germany will maintain its pressure for a far-reaching overhaul of the existing Dublin system, which hands responsibility for processing migrants to authorities in the first EU country they enter.

Ahead of next month’s EU summit in Austria, set to be dominated again by the migration crisis, the chancellor warned of the consequences of failure.

“The racist tendencies that we see lamentably in all the member states are something we have to fight against,” she said.