Trump calls Omarosa a ‘lowlife’ in response to tell-all book

US president Donald Trump has called former White House aide Omarosa Manigault Newman a "lowlife" ahead of the release of her book recounting her role in Trump's political rise. Video: Reuters 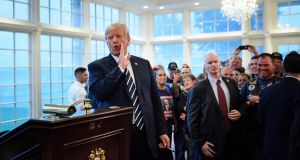 US president Donald Trump makes a comment to the press about former aide Omarosa Manigault Newman during a Bikers for Trump event in Bedminster, New Jersey. Photograph: Brendan Smialowski/AFP/Getty Images

Manigault Newman claimed in the book, entitled Unhinged, that the president had used the “N-word” repeatedly, and also used racial slurs to refer to George Conway, the half-Filipino husband of top White House aide Kellyanne Conway.

Manigault Newman, who had previously appeared with Trump on his reality television show The Apprentice, also said in the book that she believed he was “a racist, a bigot and a misogynist”.

The remarks were a break with comments she made during the campaign, when she vowed that those who had criticised Trump would bend the knee to him.

“Every critic, every detractor, will have to bow down to president Trump,” Manigault Newman said in an interview with PBS in 2016. “It’s everyone who’s ever doubted Donald, who ever disagreed, who ever challenged him. It is the ultimate revenge to become the most powerful man in the universe.”

Asked about the allegations at a photo-op with the group Bikers for Trump on Saturday in Bedminster, New Jersey, the president said: “Lowlife ... She’s a lowlife.”

Manigault Newman was dismissed from the White House in December 2017. At the time, a source familiar with her departure told the Guardian that she had long been uncomfortable defending the Trump administration as the most prominent black woman in the White House. Her tenure culminated when the chief of staff, John Kelly, summoned her to the White House situation room to fire her.

Afterwards, Trump praised Manigault Newman on Twitter, saying: “Thank you Omarosa for your service! I wish you continued success.”

On Friday, the White House press secretary, Sarah Sanders, issued a statement on the book, saying it was “riddled with lies” and condemning Manigault Newman for not praising Trump.

“Instead of telling the truth about all the good president Trump and his administration are doing to make America safe and prosperous, this book is riddled with lies and false accusations,” said Sanders. – Guardian

1 Eating out in Dublin – the homeless way
2 Which jobs do teenage girls and boys aspire to have by age 30?
3 Irish Times poll: Large majority want change of government
4 Miriam Lord: Greens take to the beach as signs emerge of a rising tide
5 Coronavirus: Public health emergency expected to be declared
Real news has value SUBSCRIBE