Russia reacts with outrage to ‘absurd’ and ‘unlawful’ US sanctions 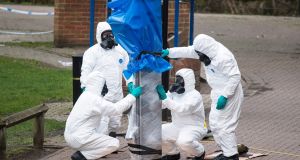 Army officers remove the bench last March where Sergei Skripal and his daughter Yulia were found, in Salisbury, Wiltshire. Photograph: Will Oliver/EPA

Russian officials reacted with outrage and markets slumped on Thursday morning following the announcement of tough new US sanctions over Russia’s alleged use of a nerve agent in the Salisbury attack.

President Vladimir Putin’s spokesman, Dmitry Peskov, said the sanctions were “absolutely unlawful and don’t conform to international law”, as Russian politicians vowed to respond with counter-measures, which could include bans on the exports of rockets or resources for manufacturing.

“The theatre of the absurd continues,” tweeted Dmitry Polyanskiy, first deputy permanent representative of Russia to the UN. “No proofs, no clues, no logic, no presumption of innocence, just highly-likelies. Only one rule: blame everything on Russia, no matter how absurd and fake it is. Let us welcome the United Sanctions of America!”

One senior Russian MP called the US a “police state”.

A member of the Duma’s foreign affairs committee, Leonid Slutsky, said Russia could block exports of RD-180 rocket engines to the US as a potential countermeasure, the RIA Novosti news agency reported.

The United States announced on Wednesday that it would impose restrictions on the export of sensitive technology to Russia because of its use of a nerve agent in the attempted murder of a former Russian spy and his daughter in Britain.

The State Department said the new sanctions would come into effect on August 22nd and would be followed by much more sweeping measures, such as suspending diplomatic relations and revoking Aeroflot landing rights, if Russia did not take “remedial” action within 90 days.

Moscow is not expected to agree to the response required by US legislation, which includes opening up Russian scientific and security facilities to international inspections to assess whether it is producing chemical and biological weapons in violation of international law.

“Certainly it is really up to Russia to make that decision, whether they meet this criteria,” a senior administration official said. “The second round of sanctions … are in general more draconian than the first round.”

Russian markets took the news poorly. Stocks in Aeroflot, the country’s national carrier, fell by 12 per cent in trading before lunchtime on Thursday over concerns that its direct flights between Russia and the US could be halted entirely.

Russia’s currency, the rouble, fell to below 66 to the US dollar, a 4 per cent slide from Wednesday morning that began with the leak of a separate draft sanctions bill that could see Russia named a state sponsor of terror.

The US has already expelled 60 suspected Russian spies as part of a global response to the March attack in Salisbury against Sergei Skripal, a former colonel in Russian military intelligence, and his daughter, Yulia , in which a rare and potent Russian-made nerve agent, novichok, was found to have been used.

The Kremlin has vehemently denied British accusations that it orchestrated the attacks. Since the March attack, two other residents from the Salisbury area have been poisoned by exposure to novichok.

Dawn Sturgess died in July after handling a small bottle contaminated with the nerve agent on June 30th. Her partner, Charlie Rowley, was also taken ill after being exposed to the nerve agent.

The new sanctions involve the export of a long list of equipment deemed to be sensitive on national security grounds, including gas turbine engines, integrated circuits, and calibration equipment used in avionics. A US official said that about half of US exports to Russia contained sensitive components. At the moment, such exports are considered on a case-by-case basis. After August 22nd, there will be a “presumption of denial”, meaning that the default position will be for such exports to be banned.

“We are applying these sanctions against essentially all Russian state-owned or state-funded enterprises. That’s potentially a very great sweep of the Russian economy in terms of the potentially affected end users,” a senior official said. “It may be that something on the order of 70 per cent of their economy and maybe 40 per cent of their workforce falls within those enterprises.”

The official said the value of the affected exports could run to “hundreds of millions of dollars”.

The administration has signalled, however, that it intends to grant exemptions for foreign assistance, co-operation on space projects and aviation safety.

The senior official would not say if new intelligence had triggered the sanctions, but they come at a time when UK authorities appear to be making progress in the investigation. The British government is poised to submit an extradition request to Moscow for two Russians suspected of carrying out the Salisbury attack.

A British government spokesman welcomed Washington’s announcement, saying: “The strong international response to the use of a chemical weapon on the streets of Salisbury sends an unequivocal message to Russia that its provocative, reckless behaviour will not go unchallenged.”

The sanctions are the latest in a series of tough measures approved against Russia that seem at odds with US president Donald Trump’s reluctance to criticise Mr Putin publicly.

During a jarring public appearance in Helsinki last month, Mr Trump appeared to disregard his own senior intelligence chief’s testimony that Russia had tried to interfere in the 2016 US presidential elections, and the Salisbury chemical attack was barely addressed at all. But while Mr Trump has acted deferentially toward the Russian leader in public, the harsh measures in the sanctions bill are largely regulated by a US law on the use of chemical weapons, and leave the Trump administration little room to manoeuvre. – Guardian