Munich security conference told US, China and Russia are sharing a short-sighted goal 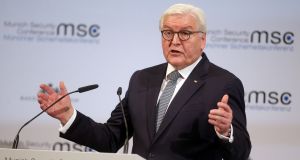 Frank-Walter Steinmeier, president of the federal-republic of Germany, at the 2020 Munich Security Conference, on Friday, in Munich. Photograph: Johannes Simon/Getty Images

Munich’s annual security conference opened on Friday with a stark warning from Germany’s president that the rise of self-serving nationalism poses the greatest risk to global prosperity and future generations.

In a hard-hitting speech, Frank Walter Steinmeier accused the US, China and Russia of sharing a short-sighted goal to destroy the post-war rule-based, multilateral order.

“Such thinking is worse than a return to the past – it robs us of our future in a closely-interlinked world,” said Mr Steinmeier. “Blinkers and short-sightedness will also generate higher costs for the big players.”

The German president was aware that many in the Munich audience are impatient at a perceived gap between Berlin political leadership and security commitment.

Six years ago in the same venue, then German president Joachim Gauck warned his country not to use its Nazi past as an excuse for cowardice today on security matters. Berlin should, he argued, “make a more substantial contribution, and it should make it earlier and more decisively”.

On Friday Mr Steinmeier took a different tack, hitting back at US president Donald Trump’s regular criticism of Germany’s defence underspend. Berlin would stand to its alliance spending commitments, the German president said, and would push to strengthen Nato’s European pillar.

But he suggested a far greater risk to security than missed Nato spending targets was posed by a disregard for human rights and international law, and untrammelled nationalist egotism.

“We cannot compensate for the loss of diplomacy . . . of arms treaties or international agreements with tanks, warplanes and mid-range missiles,” said Mr Steinmeier, in his opening address to the annual gathering taking place this year under the theme “Westlessness”.

Conference founder Wolfgang Ischinger defined this theme as a growing feeling of unease about the identity, purpose and even decay of the West.

“We appear to have lost a common understanding of what it even means to be part of the West,” he said.

Concern about the decline of the West, and growing disregard of long-standing international legal conventions, are likely to dominate the two-day gathering attended by 500 high-level participants, including about 35 heads of state and government.

In another session on Friday afternoon, Austrian chancellor Sebastian Kurz shared the concerns of the German president about the price to be paid for a rise of western unilateralism.

“If we lose competitiveness and quality of life then other countries with non-democratic systems become more attractive for people and that would be incredibly dangerous,” he said.

Issues up for discussion over the weekend in Munich include tensions in Libya and the Persian Gulf, trade disputes between the EU and the United States, and ongoing tension between Germany and the US over the Russia-Germany gas pipeline project Nord Stream 2.

Saturday’s sessions will see contributions from US secretary of state Mike Pompeo, heading one of the largest Washington delegations in recent years, and the presidents of France and Ukraine, Emmanuel Macron and Volodymyr Zelenskiy.

German foreign minister Heiko Maas argued the rule-based world order was under new pressure because the era of the US as a global policeman was over and Europe – including Germany – was struggling to fill the gap.

“Germany is prepared to increase our commitment, including military commitment, but it must be embedded in political reasoning,” he said. “More responsibility and commitment cannot be the same as more military. If you think that way you can never solve the complexity of [world] conflicts.”