Coronavirus hangs over Tokyo as it limbers up for Olympics 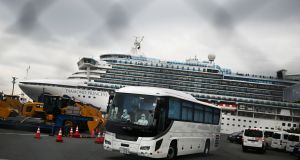 The Diamond Princess cruise ship has 3,600 people quarantined onboard due to fears of the new COVID-19 coronavirus. It is berthed at the Daikoku Pier Cruise Terminal in Yokohama port. Photograph: Charly Triballeau/AFP via Getty

Built on reclaimed land in a soulless landscape of tickertape roads and container warehouses, Daikoku Pier has been temporary home to the Diamond Princess cruise ship for nearly two weeks. From the ship’s decks, the 3,700 passengers and crew, including at least one Irish couple, can see life bustling in the sprawling metropolis across Tokyo Bay but cannot rejoin it.

They have been quarantined off the Yokohama coast since an elderly passenger who got off in Hong Kong before the ship left for Japan was diagnosed with the coronavirus. More than 218 people on board have since been infected in what some have dubbed a petri dish for the latest modern plague. Nearly all the passengers are confined to their cabins in an attempt to keep the virus at bay.

The strategy may be failing. Though most of the 250 or so coronavirus cases in Japan have been found on the Diamond Princess, the first confirmed victim had no connection to the ship. Health officials say the 80-year-old woman, who died in hospital on Thursday, was the mother-in-law of a Tokyo taxi driver who began showing symptoms two weeks ago. They are now trying to find how many more people the driver may have infected.

Tokyo hospitals are bracing for the prospect that the disease may spread in one of the world’s most crowded metropolises. Many have already seen a flood of new visitors with suspected pneumonia symptoms. A call centre set up by health ministry gets about 1,000 inquiries a day. The government is developing a cheap kit to check for infections but it could be weeks or more before its available.

The death of the first victim comes just 160 days before the start of the Tokyo Olympics on July 24th. Prime minister Shinzo Abe has been quick to deny that the world’s biggest sporting event will be affected. “There have been no talks or plans being considered between organisers and the International Olympic Committee since the World Health Organisation declared an emergency,” Abe insisted last week.

A great deal of national prestige is at stake. Japan has already spent in excess of €11 billion on Olympic preparations – though some estimates suggest the eventual cost could be twice that. Several major infrastructure projects, including a new stadium and train station, are complete. About 10 million visitors are expected in the capital for the games in July and early August.

Tokyo’s successful pitch for the Olympics in 2013 rode a wave of patriotism, amid the agonising recovery from the March 2011 disaster (earthquake, tsunami and nuclear meltdown) in the country’s northeast. The event is something of a legacy project for Abe, capping his nearly eight-year run as prime minister and finally casting off the gloom of the country’s post-1980s inertia.

With cancellations of some international sporting events already beginning across Asia, the local organising committee for the Olympics launched a task force this week to respond to the threat from the coronavirus. Toshiro Muto, the committee’s chief executive had admitted that he was “seriously worried” about the impact of the disease. Yet, Yoshio Mori, the president of Tokyo 2020, sought to steady nerves this week. “I want to again state clearly that cancellation or postponement of the Tokyo Games has not been considered,” he said.

This business-as-usual message from Tokyo has been criticised by one of England’s leading public health experts. Dr John Ashton, the former director of public health for northwest England, told Tthe Telegraph this week that the Olympic organisers should be “thinking the unthinkable” while infection rates are still rising.

In the meantime, local authorities are taking their own precautions. Kyoto has asked Chinese runners to stay away from this Sunday’s marathon in the city. Tokyo has also promised to automatically enter Chinese nationals in next year’s event if they avoid the city’s marathon on March 1st. The national government, meanwhile, has dipped into reserve funds for 10 billion yen (about €85 million) to subsidise production of facemasks and vaccines.

Some have begun suggesting, on dubious scientific grounds, that Japan’s humid summer will kill off the virus. Even if true, the damage will mount well before then unless the virus is contained.