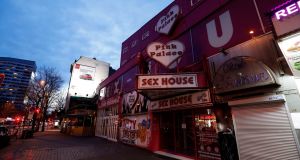 Sex workers in Germany say they face financial ruin during the Covid-19 pandemic, as brothels remain shut and many are excluded from emergency funds to help small businesses and sole traders.

Prostitution is a legal profession in Germany, with sex workers able to collect a state pension after paying taxes and welfare contributions. Brothels were closed last month, along with restaurants, bars and clubs. But unlike other businesses, able to reopen in the coming weeks, brothels still have been given no indication when they can reopen for business. Trading without permission could result in fines of up to €5,000.

Organisations representing Germany’s sex workers have sounded the alarm for the estimated 80 per cent of the 200,000 prostitutes working here who come from Bulgaria, Romania, Poland and Ukraine.

Many were not registered with the tax and welfare authorities and were unable to get home in time before travel restrictions were imposed. With no savings or entitlements, some have been forced back to street-walking while others are showing up at farms, asking to work harvesting asparagus and strawberries.

Five years ago the Beehive opened its doors in Heidelberg as Germany’s first climate-neutral “eco-brothel”. The self-employed women who work here have been given a break from their regular €70-a-day room rent, but many face an uncertain future.

“Everything has collapsed, we’re nervous and are worried about our existence,” said Jenny, to a local newspaper. She works as a tattoo artist and a stripper, both prohibited under current restrictions.

Across town at the Eros Centre, security man Kai said at least 200 people are ringing each day to ask when the brothel is reopening.

In Frankfurt’s red-light district a drop-in centre for sex workers says some women are working illegally on the street, either to finance their drug habit or because their families back home depend on their income.

“Nothing’s possible with two metres’ distance,” she said. “Nor can I imagine working with a face mask.”

“With this work, I never thought I would be unemployed,” she told Die Welt. “A lot of regulars are calling to buy vouchers to use later.”