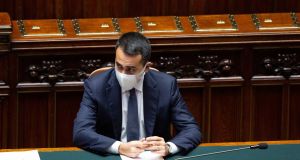 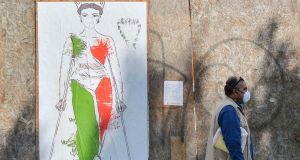 epa08409377 Work on the wall by the italian artist Cristina Donati Meyer Entitled 'Viva l'Italia' which represents the country in crutches on a wall in Milan, Italy, 08 May 2020. The Italian government is gradually lifting the lockdown restrictions that were implemented to stem the widespread of the Sars-Cov-2 coronavirus causing the COVID-19 disease. EPA/ANDREA FASANI

Euro zone countries will not be obliged to impose austerity if they take bailout fund loans to pay for direct and indirect healthcare costs, finance ministers agreed as they met over video conference to discuss how to respond to the economic blow of the Coronavirus pandemic.

The 19 ministers of the Eurogroup gave the green light to proposals that the bloc’s bailout fund should provide countries with 10-year credit lines of a value of up to 2 per cent of their gross domestic product, part of a package of measures designed to help countries face a downturn forecast to be historic in scale.

Countries have until 2022 to apply for the Pandemic Crisis Support, and the only condition imposed will be that the funds must be spent on direct or indirect healthcare costs. Eurogroup president and Portuguese finance minister Mário Centeno emphasised that the usual bailout requirements to balance public accounts through cuts and austerity would not apply.

“There is no stigma for any country,” Mr Centeno said. “There is no sort of troika post-accession surveillance, and this is very important to stress.”

The reassurance is aimed to counter public opposition in countries such as Italy towards taking bailout loans, due to the experience of austerity that followed the last crisis.

The euro zone countries remain in a stand-off over an additional recovery fund, which Rome argues is essential to avoid the pandemic exacerbating the euro zone’s economic imbalances.

The Mediterranean capitals have been advocating for grants rather than loans to avoid increasing already mountainous debt piles, and for the issuance of shared debt as a step forward in integration that would bring down borrowing costs.

But this is sternly opposed by a group of northern states led by the Netherlands, which have strong public opposition to mutualised risk due to the fear of ending up on the hook for weaker economies.

With countries struggling to agree, the European Central Bank has embarked on a mass bond-buying programme to bid down the borrowing costs of weaker states and avoid a repeat of the last decade’s debt crisis.

The European Commission has been charged with designing a proposal for the recovery fund, which is expected to involve borrowing from financial markets against guarantees by member states, and is due to be presented to member states for consideration in the coming weeks.

Ahead of the video conference, Italian foreign minister Luigi Di Maio said that the crisis highlighted incomplete integration in the EU and said a “structural” response was required.

“The health emergency has confronted the European Union with the most severe economic crisis in its history. The response we are giving and will give will inevitably define the future of the union,” Mr Di Maio said in an address to the European University Institute’s State of the Union Conference. “Further measures are urgently needed.”