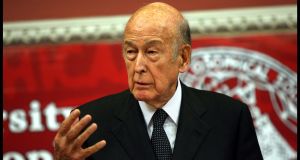 Former French president Valéry Giscard d’Estaing at Trinity College in 2009. His office said he had no memory of the incident. Photograph Brenda Fitzsimons

A German journalist is suing ex-French president Valéry Giscard d’Estaing, claiming the 94-year-old groped her during an interview in December 2018.

Mr Giscard d’Estaing’s time as French president, from 1974 to 1981, overlapped with Schmidt’s time as chancellor in Bonn and the two remained friends until Schmidt’s death in 2015.

After the interview, Ms Stracke asked to take a photograph with Mr Giscard d’Estaing and her camera crew. The Frenchman agreed but, as she was taking the picture, she said his hand drifted from her waist to her bottom.

Ms Stracke said she tried unsuccessfully to push his hand away. When Mr Giscard d’Estaing suggested they look at the photos together, the journalist said the former president’s hand drifted again towards her bottom.

At that point a lamp fell to the floor behind her and the German television crew left. As they parted, the journalist says Mr Giscard d’Estaing told her: “Sweet dreams.”

Ms Stracke said she was initially so perplexed by the alleged incident that she didn’t know how to react.

“The conversation went very well, I didn’t consider possible that something like this could happen,” she told the Süddeutsche Zeitung newspaper.

Back in Germany, and motivated by the #Metoo movement, Ms Stracke told a superior about the encounter. WDR engaged an external law firm with the case and two lawyers questioned the journalist. The cameraman confirmed having seen the incident during questioning, and said he dropped the lamp as a distraction. A sound engineer, also part of the crew, initially confirmed the incident but later withdrew the testimony.

In a letter to Mr Giscard d’Estaing, lawyers for WDR said Ms Stracke was “shocked by your behaviour and would like to rebuke it as completely unacceptable”.

“We will not tolerate that our employees are confronted with such a situation,” continues the letter, cited in the Süddeutsche, “and hope very much that such behaviour . . . won’t be repeated”.

His office manager Olivier Revol told the Süddeutsche and Le Monde that Mr Giscard d’Estaing was sorry if the incident happened and pointed to the former politician’s advanced age.