A fortnight ago McHugh said predicted grades were ‘biased’. What changed? 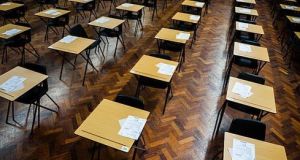 It soon became clear that if the Leaving Cert was to go ahead it would be nothing like the regular exam. Photograph: Getty Images

When asked why he was not considering the option of predicted grades, he ruled it out in stark terms. There was, he said, “too much inherent bias” in the system ,and it would not be fair given the nature of our close-knit society.

“There’s the practicality of teachers grading nieces, nephews, sons or daughters, or teachers who are easy markers or hard markers... we don’t feel the policy of predicted grading is a fair system.”

On Friday he announced a stunning reversal. Students would, after all, receive predicted or “calculated” grades in which teachers and schools will play a central role. Anyone unhappy with their results would have the chance to sit the written exams at a much later and unspecified date.

So what changed so dramatically in that time ?

Mounting pressure and growing uncertainty was piling on the Department of Education with every passing day.

The decision to defer the June exams and eventually announce a new date – July 29th – subject to public health advice – only fuelled doubt over the status of the exams.

Opinion polls showed a growing majority of student and parents opposed to the idea of extending the exams into late summer given the mental health toll and health risks.

Teachers were also raising grave concerns in private over the potential risks to staff and students.

Some senior department officials were keen to make a call early on to cancel the exams.

Higher education sources were also sceptical from as early as mid-March that the exams could ever go ahead. However, McHugh and some close to him, according to well-placed sources, were keen to ensure the exams would go ahead at all costs.

Public health advice, however, was alarming. Some of it indicated that just one major exam could be held each day. Exams might have to be truncated to just an hour and a half.

The exams themselves may have ended up being staged over the course or a month or more and into early September.

It soon became clear that if the Leaving Cert was to go ahead it would be nothing like the regular exam.

The clues were there to see: there was no reference to the exams in the Government’s roadmap for easing Covid-19 restrictions; Leo Varadkar made a passing reference to the idea of predicted grades on The Late Late Show.

Fianna Fáil’s education spokesman Thomas Byrne made a telling intervention when he called for the exams to be cancelled the following day.

While work on a “plan B” had been taking place in the background over recent weeks, there was a flurry of activity in recent days to get teachers onside and fine-tune the details.

Some education sources grumbled that a more decisive call earlier on to cancel the exams would have avoided much of the stress and anxiety over the shifting status of the exam.

However, McHugh was also faced with a series of bad options. If he was to cancel the exams he needed a rock-solid “plan B” in place, according to those close to him. This, they say, took time to get over the line.

Was it the right call? Could the exams have been held in the same way as they are being in about a dozen European countries? There are contrasting views on all of this.

There are still many unanswered questions over the fairness and transparency of the calculated grades system, as well as legal vulnerabilities which may come back to haunt the Government.

For now, though, most students and parents are just relieved there is finally some certainty.