Europe marks 70 years of integration in time of historic challenge 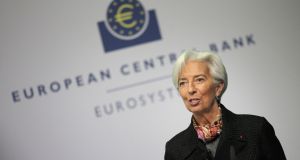 ECB president Christine Lagarde: ‘Can we respond to the economic threat which as we know is unprecedented in peacetime?’ Photograph: Daniel Roland/AFP via Getty

The European Union marks 70 years since the landmark first step towards integration on Saturday, at a time when the coronavirus pandemic is posing unprecedented challenges.

Europe Day is held to celebrate peace and unity on the continent on May 9th each year, the anniversary of the so-called Schuman Declaration by French foreign minister Robert Schuman, seen as the foundation stone of the EU.

It led to the European Coal and Steel Community of France, West Germany, Italy, the Netherlands, Belgium and Luxembourg, founded in the wake of the second World War with the idea that shared interests would avoid future wars and build prosperity.

This year, its 70th anniversary dawns on a continent with sealed borders between countries that have long had free movement, facing the biggest economic downturn in its history and divided over how to respond.

Pandemic restrictions mean celebratory events are to be held online rather than in the EU institutions, which usually throw open their doors to the public and host concerts and debates to mark the day.

Instead, the Luxembourg border town of Schengen, which gives its name to the EU area of free movement that was agreed there in 1985, has been flying its EU flag at half mast due to strict controls that allow only goods and commuters to pass the frontiers.

A group of German lawmakers appealed for the immediate reopening of its borders with Switzerland, France and Luxembourg, saying the closures had divided families, hindered children who attend school on the other side, and caused delays for commuters.

“After more than seven weeks, there must be an end to wire fences and tollgates in the heart of Europe,” the 12 lawmakers from chancellor Angela Merkel’s Christian Democratic Union wrote.

Several European leaders evoked the spirit of the Schuman Declaration to appeal for solidarity and unity in overcoming a stand-off that has developed over how to respond to the economic crisis caused by the pandemic.

Italy, which has led calls for greater integration in the form of joint debt to ease economic imbalances in the euro zone against fierce opposition from the Netherlands, called for a “quantum leap” forward.

“The EU economic response to the crisis . . . must help us to reflect on the incomplete nature of our economic and monetary union,” said Italian foreign minister Luigi Di Maio in an address to the European University Institute’s State of the Union conference.

“If we had equipped ourselves in good time with effective macroeconomic stabilisation instruments, including those financed by European bonds, we would not have to devise solutions in a time of emergency.”

President of the European Central Bank Christine Lagarde said EU countries would need to borrow at least €1.5 trillion this year alone to pay for their response to the pandemic, and appealed to leaders to rise to the challenge.

“The question that we face today is this: can we respond to the economic threat that we are facing which as we know is unprecedented in peacetime? Can we respond in a way that reflects our fundamental common interest as those generations of Europeans did in the past?” Ms Lagarde said.

“It may well be that now is our Schuman moment.”