A further 27 people have died of disease, as 156 new cases confirmed 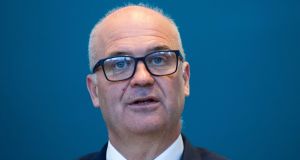 Ten outbreaks of Covid-19 have occurred in meat-processing plants and 566 staff have been infected, according to the National Public Health Emergency Team (NPHET).

HSE outbreak-control teams have been sent into each plant to try to control the outbreaks, according to chief medical officer Dr Tony Holohan.

The deaths of another 27 patients were announced by NPHET at its briefing on Friday. There have now been 1,429 Covid-19 related deaths in the Republic.

Some 156 new cases of the disease were reported by NPHET. The new cases bring the total number to 22,541.

Compliance with restrictions introduced to curb the spread of the virus remains very high, according to Dr Holohan, who presented a variety of data on car traffic, heavy goods vehicle movements, public transport numbers, ATM usage and personal activity as measured by Google.

“All together, this data says the population is complying very well and that this compliance is being maintained,” he said.

Over-85s account for 10.2 per cent of all cases, and 45.6 per cent of deaths, according to a breakdown of older age groups provided for the first time.

Consideration is being given to testing all residents of direct-provision centres, where 149 cases in 12 clusters have been reported, he said.

Any asylum-seeker in direct provision who has Covid-19 and is unable to self-isolate is entitled to use the isolation facility at Citywest, officials clarified.

Asked whether the Department of Education had made the right decision in cancelling this year’s Leaving Cert, Dr Holohan said it had followed public health advice.

This graph shows traffic information. Selected points around the road network pick up traffic movements. This level of compliance has been maintained, right up to 6 May.

He said he hoped to see schools resuming activity in the autumn “if things go well for us” but “it is impossible to make certain predictions about where we will be at the beginning of September”.

NPHET was still considering whether a re-opening of schools would be full or partial at first, he said.

Changes to the case definition for testing for the disease, as well as the requirement for people seeking testing to belong to a priority group, have resulted in a doubling of referrals through GPs, Dr Holohan said, but this was “well within predictions”.

A total of 378 people with Covid-19 have been admitted to intensive care, of whom 74 remain there. Two new patients were admitted over the last 24 hours.

The number of cases associated with healthcare workers has risen further to 6,586.

Speaking on Friday at the opening of a Covid-19 assessment hub for vulnerable groups at the Mater Hospital in north Dublin, Minister for Health Simon Harris said progress is being made in nursing homes to fight the spread of Covid-19 but it remains an “area of concern”.

Mr Harris said it is “a tragic fact” that many people have died of the virus in Ireland and “many of them have been in nursing home facilities”.

Mr Harris said he was encouraged by the large-scale testing programme of staff and residents at long-term residential care facilities and that he is continuing to engage with Nursing Homes Ireland and Hiqa.

Marginalised groups and other “challenging” sectors are to become a new frontline of the battle against Covid-19.

Some 58 per cent of Roma who have undergone testing, and 43 per cent of Travellers, have had a positive result, according to official figures. .

The new hub includes a mobile unit to test and treat marginalised groups across the inner city, and will be able to deliver test results in under an hour.

He said there were encouraging signs in terms of hospital and ICU admissions but warned “this virus hasn’t gone away”.

The Minister said that anyone currently flying into the State is required to fill out a passenger locator form and asked to self-isolate for two weeks and disclose where they are self-isolating.

“At the moment that’s being done on an administrative basis and we are now looking at putting that on a regulatory footing so that it becomes mandatory,” he said.