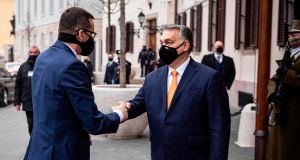 Hungary and Poland have urged the European Union to deal separately with urgent budget issues and rule-of-law concerns, after blocking a €1.8 trillion financial plan that links funding to respect for democratic norms.

They vetoed the bloc’s €1.1 trillion 2021-2027 budget and €750 billion coronavirus recovery package last week in opposition to a mechanism that advocates say is essential to fight corruption and prevent misuse of EU money.

The nationalist governments in Warsaw and Budapest fear Brussels could “blackmail” them by withholding financing over their alleged attacks on judicial independence, civil society, media freedom and the rights of asylum seekers.

Hungarian prime minister Viktor Orban and Polish counterpart Mariusz Morawiecki said on Thursday they would fight the current proposals together, despite concerns that further delay to a deal could exacerbate economic damage caused by the pandemic.

“This debate cannot be solved with money. Those who conflate these two issues (rule of law and funding) are irresponsible, as at a time of crisis rapid decisions are needed,” Mr Orban said after talks with Mr Morawiecki.

“We are uniting our interests and arguments in the discussion. Hungary does not accept any arguments that would be unacceptable to Poland,” he added.

“We gave ourselves and the German presidency (of the EU) time to try to find a compromise . . . by the end of this year.”

The two leaders also unveiled what they called a joint proposal “to facilitate speedy adoption of the financial package by establishing a two-track process”.

Despite being the only members of the 27-state EU to veto the plan, Mr Morawiecki claimed Poland and Hungary were acting in the interests of the bloc.

“This is extremely dangerous for Europe’s cohesion, it is a bad solution that threatens a breakup of Europe in the future,” he said. “Today is not the time to wobble this European boat, but to act together for the union.”

Senior EU officials insist the financial deal agreed by national leaders in July included a rule-of-law condition. Analysts say willing member states could launch the recovery fund without Hungary and Poland, and the bloc could use a narrow, provisional budget next year.

EU Commission president Ursula von der Leyen this week said any state could challenge the rule-of-law mechanism at the European Court of Justice.

“That is the place where differences of opinion about legislative texts are usually settled and it is not done at the expense of millions and millions of European citizens who are urgently waiting for our help,” she added.