German data hacker says he was ‘annoyed’ by politicians 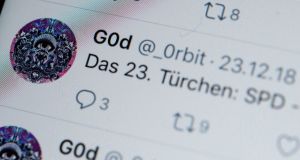 The suspect published the leaked data on the Twitter accounts “G0d” and “0rbit. Photograph: Clemens Bilan/EPA

The hacker behind a massive leak of personal data of German politicians – including chancellor Angela Merkel – has been revealed as an angry 20-year-old man operating from his childhood bedroom.

On Friday, German cyber security officials revealed that phone numbers, text messages, photographs, credit card numbers and other data from up to 1,000 MPs, journalists and other public figures had been stolen, collated and spread via Twitter and other online platforms.

The leaks began in early December but the scale only became apparent after Christmas. As the information ping-ponged around the internet, chased by German cybersecurity officials, federal police swooped on a 20-year-old German citizen with “considerable IT skills” living in the western state of Hesse.

The young student has admitted he was behind the attacks that some blamed on foreign intelligence services. Investigators say it is likely he acted alone but are still searching for clues of third-party involvement on his computers, hard drives and other technical equipment.

“He said he collected the data because he felt annoyed by certain remarks by targeted politicians, journalist and public figures,” said Georg Ungefuk, spokesman for a regional cyber crime unit (ZIT) in Hesse.

He said the young man claimed he was “not aware” of the far-reaching effects of his hacking activities until they became headline news – and made a “contrite impression” during questioning.

“You can imagine the massive investigation has left an impression,” said Mr Ungefuk. “We often have situations where thinking only begins when young people are contacted by the police.”

Released after questioning, because he posed no flight risk, he could face two charges of spying on others’ data and handling in stolen data. Both charges carry either prison sentences of up to three years or a fine – although he may instead face a youth sentence.

Since Friday, Germany has been in a state of alarm, with federal police, multiple government agencies and intelligence services working around the clock to track the hacker and close down mirror links to the data.

In many cases the data was public information but in other cases, politicians and journalists had private chats and family photos leaked.

German politicians and police said they were relieved they appeared to have their suspect, but expressed concern that such a massive hack was possible from a 20-year-old’s bedroom. The young man insists he used no malware or other spy software but simple password-cracking software.

“Everyone is urged to change their passwords and protect their data,” said Dr Sabine Vogt of the federal criminal police (BKA). “People need to be aware that there is a dark side to the internet.”

Federal interior minister Horst Seehofer, under pressure for days over the leaks, hit back at claims his officials had acted too slowly.

“We will do all we can but we cannot promise 100 per cent security,” he said. “It’s about the highest possible level of security based on the current technical possibilities.”