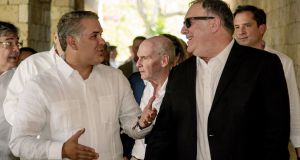 The United States is deeply concerned about an increase in coca cultivation in Colombia, secretary of state Mike Pompeo said on Wednesday, but will work with the Andean country to cut production of the raw material for cocaine in half by the end of 2023.

Mr Pompeo met with Colombian president Ivan Duque on a brief visit to the coastal city of Cartagena.

“The United States remains deeply concerned about the surge in coca cultivation and cocaine production in Colombia since 2013,” Mr Pompeo told journalists following the meeting.

Colombia has long been ranked as the world’s top producer of cocaine, for which coca is the base ingredient, but figures compiled by the United Nations for 2017 showed the largest potential output since the organisation began keeping records, with cocaine production at 1,379 metric tons.

“We will continue to work with you Mr President side-by-side to achieve our joint objectives to cut coca cultivation and coca production by 50 per cent between now and 2023,” Mr Pompeo said.

Colombia’s acreage of coca, the raw material for cocaine, expanded 17 per cent to 171,000 hectares (422,550 acres) in 2017, according to the UN. The uptick was due to increased productivity and growers eager to expand in hopes of getting more aid to switch to legal crops.

The US commitment to helping Colombia dismantle organised crime groups is “vital”, Mr Duque said in his remarks.

Aerial fumigation with the herbicide glyphosate, suspended in 2015 after being linked to cancer, may be reinstated if it can be made to comply with judicial conditions, Mr Duque has said.

Mr Duque and Mr Pompeo also discussed the crisis in Venezuela, where hyperinflation and food and medicine shortages have spurred more than 3 million people to flee over the past several years, including more than a million who now live in Colombia.

Mr Pompeo commended Colombia for its support of Venezuelan migrants and said he and Mr Duque discussed how to collaborate on aid with regional and international bodies.

The United States has placed sanctions on Venezuela’s debt and on some officials in socialist president Nicolas Maduro’s government, which it accuses of corruption and human rights violations.