British police told to intervene after MPs abused over Brexit 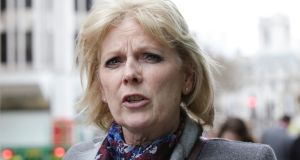 Police officers around the British parliament have been told to “intervene appropriately” after the Conservative MP Anna Soubry accused them of ignoring abuse directed at politicians and journalists.

The London Met’s deputy assistant commissioner, Laurence Taylor, defended the way it polices parliament after Ms Soubry accused the force of ignoring the targeting of politicians and journalists with abusive and racist chants on Abingdon Green, a grassed area outside parliament used by broadcasters.

He also said officers had been instructed to intervene after they were filmed on Monday standing by while the abuse took place.

Mr Taylor said: “An ongoing policing operation at the parliamentary estate around Brexit continues and we have an appropriate policing plan in place. Our role is to facilitate peaceful protest and balance the needs and rights of all those present, including protesters, MPs and members of the public.

“We will deal robustly with incidents of harassment and abuse against anyone where that harassment or abuse constitutes a criminal offence.

“Officers in the area have been briefed to intervene appropriately where they hear or see breaches of the law.”

Speaking to ITV’s Good Morning Britain the day after she was called a Nazi while carrying out interviews, Ms Soubry said there was a small group of people “roaming around Westminster intimidating people going about their lawful business”.

The pro-EU Conservative MP for Broxtowe added that while she expected a level of criticism and abuse as a member of parliament, she wanted authorities to act when it “crossed the line”.

She told the programme: “It crossed the line in December, it was journalists who were being attacked. Faisal Islam [Sky News’s political editor], who is male, was racially abused by these people. It’s the same group, all on video and the policy of the Metropolitan police is to ignore it.”

The Met said it was investigating the incidents. In a statement, it said: “Police received a third-party report of a public order offence on Monday 7 January, in the area of College Green, SW1. Officers are assessing if any crimes have been committed. There has been no arrest at this stage.”

Nazir Afzal, former chief prosecutor with the Crown Prosecution Service for the northwest, said it was likely criminal offences had been committed. He said: “I have prosecuted public order and harassment offences with less evidence than I have seen.”

Ms Soubry was filmed as she was repeatedly called “fascist” by a group of protesters as two police officers stood by without intervening.

Sky News played a clip of the incident to Stephen Barclay, the Brexit secretary.

He said: “I’m sure the police will be reviewing that. How the police operationally behave is an issue for the police. Clearly that sort of behaviour is wrong and I condemn it completely.”

Asked whether the police response was adequate, he said: “It is for the police operationally to look at whether the law has been broken and to take action where appropriate.”

Mr Barclay later used the apparent harassment of Ms Soubry as an argument for backing Theresa May’s withdrawal deal. He told BBC Breakfast: “It is clear that this has been a very divisive time in our politics. The issue of Brexit does provoke very strong emotions on both sides, and this is one of the reasons why I do think it is now time to come together in the national interest to get behind the prime minister’s deal.”

His attempt to link the two issues was criticised by Labour MPs.

Ms Soubry’s comments followed a letter to Cressida Dick, the Met commissioner, from dozens of MPs, raising concerns about safety outside parliament.

At least 55 parliamentarians signed the letter after the Commons speaker, John Bercow, urged officers to do more to protect MPs.

The former Labour leader Ed Miliband said the incidents were “deeply disturbing” and urged to the authorities to take action.

Speaking to BBC Breakfast, he said: “We have got to keep this debate at a civilised level and we cannot have this kind of activity outside parliament or indeed anywhere. It is right that the police have been contacted. No MP, no member of the public, should have to go through this.”

He added: “I fear it is part of Brexit poisoning our politics. But all of us have got a responsibility, including the relevant authorities, to dial this down and deal with these issues. We have got to show zero tolerance for this kind of abuse.” – Guardian