Vows of silence: Clergy on trial in France for failing to report abuse 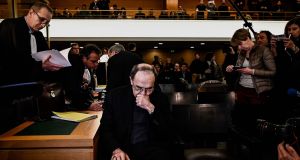 Archbishop of Lyon Cardinal Philippe Barbarin in court in Lyon, France where he is on trial charged with failing to report a priest who abused boy scouts in the 1980s and ’90s. Photograph: Jeff Pachoud/AFP/Getty Images

“I never sought to hide, much less to cover up, these horrible facts,” said Cardinal Philippe Barbarin, Archbishop of Lyon and Primate of the Gauls, on the first day of his three-day trial for “non-denunciation of sexual aggression” in Lyon on Monday.

Cardinal Barbarin and five co-defendants have been charged with failing to alert French authorities of numerous cases of sexual abuse of boy scouts by a priest between 1986 and 1991. French media have dubbed this “the trial of silence”.

Fr Bernard Preynat, now aged 72, admits to having abused boys, but cannot be prosecuted because his crimes are covered by the statute of limitations.

Lawyers for the defendants interpret the law to mean that clergy are required to notify authorities only if the victim is still a minor when they learn of the offence. If the victim has reached adulthood by the time the facts are divulged, it is up to the victim, not the Catholic Church, they argue, to turn in the perpetrator.

In July 2014, Alexandre Hezez, then aged 40, complained to Cardinal Barbarin that Preynat, who had abused him between the ages of 9 and 11, was still working with children. Cardinal Barbarin referred Mr Hezez to the lay worker who counselled victims of clerical abuse.

Mr Hezez continued to insist that the priest be removed. Cardinal Barbarin promised to send the file to Rome. Preynat remained in contact with children for 14 months after Mr Hezez’s complaint.

Preynat’s victims alerted the authorities, but the prosecutor of Lyon closed the case. Nine victims undertook a private prosecution procedure, which resulted in this week’s trial.

“Our goal is not to win,” said François Devaux, spokesman for the Parole Libérée association. “We want a legal debate about the church putting children in contact with men who they know to be sexual aggressors.”

Cardinal Barbarin had in fact learned of cases of sexual abuse by Preynat in the 2000s, and met with the priest in 2010. Preynat swore he had stopped abusing children.

“Everyone reproaches me for having believed him,” Cardinal Barbarin said in court on Monday. “In fact, no incriminating offences were discovered after [the cases he learned of in the 2000s].”

When Cardinal Barbarin was asked about the Preynat case at a press conference in Lourdes in 2016, he said, “Thanks be to God, most of the facts” of sexual abuse by priests against children fell outside the statute of limitations.

Cardinal Barbarin immediately corrected himself, but the phrase came to symbolise the Church’s silence about clerical abuse.

Thanks Be to God is the title of a film by director François Ozon about Preynat’s victims, to be released in French cinemas on February 20th.

Alluding to the outcry over his statement in Lourdes, Cardinal Barbarin told the court on Monday, “I haven’t always used the best and the most adroit words in the past.”

Maurice Gardès, the Archbishop of Auch, Thierry Brac de la Perrière, the Bishop of Nevers, and Fr Xavier Grillon are standing trial with Barbarin, who has often been mentioned as a possible pope.

Two lay persons, Pierre Durieux, who was the cardinal’s cabinet director, and Régine Maire, the volunteer counsellor who received Mr Hezez, have also been charged. The punishment for failing to denounce the sexual abuse of a child is up to three years in prison and a €45,000 fine.

The victims also cited Luis Ladaria, the secretary of the Congregation for the Doctrine of the Faith, the Vatican body responsible for formulating and defending Catholic doctrine. The Vatican said Ladaria’s immunity prevents him standing trial.

In his new year’s wishes to the diplomatic corps in Rome on Monday, Pope Francis called paedophilia “one of the most vile and harmful crimes” in existence. The abuse of children “inexorably sweeps away the best of what human life holds for the innocent, causing irreparable damage,” the pope said. “The Holy See and the entire church are committed to fighting such offences and their dissimulation.”

Pope Francis will host a world summit on paedophilia in the church in late February.

About 108,000 people have signed a petition demanding the resignation of Cardinal Barbarin. Pope Francis has repeatedly stated his opposition to the cardinal’s resignation.

1 Sil Fox tells of ‘months of hell’ as he is cleared of sex assault on woman in bar
2 Trump threatens to ‘close down’ social media companies after Twitter fact-check
3 Coronavirus: Denmark is reopening society quickly. How is it faring?
4 Miriam Lord: Leo’s Phoenix pecs just a storm in a bag of cans
5 O’Doherty and Waters to appeal court’s dismissal of legal action
Real news has value SUBSCRIBE