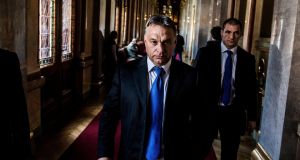 Since taking power in 2010, Mr Orban and his Fidesz party have moved strongly to the right, and claim to be defending Hungary and Europe’s “traditional Christian values” by opposing immigration and promoting conservative causes.

The EU is taking Hungary to court over its asylum policy, its crackdown on NGOs and education reform that could force the liberal Central European University (CEU) to leave Budapest, but Mr Orban shows no sign of changing course.

“The Hungarian government is of the clear view that people are born either men or women. They lead their lives the way they think best, but beyond this, the Hungarian state does not wish to spend public funds on education in this area,” Mr Orban’s chief of staff, Gergely Gulyas, said this week.

He also argued that low student numbers showed there was no economic reason to retain the courses at the state-run Elte university and at CEU, which is funded by Mr Orban’s bete noire, billionaire philanthropist George Soros.

Fidesz spokesman Istvan Hollik said, “You don’t have to be an expert to see there’s not much demand in the labour market for gender studies.”

“It is also no secret that our goal is to make Hungary a truly Christian-democratic country, which defends its normality and life and values on the basis of Christian values,” he told Hungary’s Hir television station.

“And now there’s this situation with gender studies, which is not a science but an ideology and one which is closely linked to liberal ideology, and I don’t think it fits in here.”

Mr Orban claims he is leading Hungary into a new era of deep political and cultural change, following Fidesz’s landslide re-election in April over a fractious opposition that increasingly struggles for funding and media coverage.

“An era is a special and characteristic cultural reality. An era is a spiritual order, a kind of prevailing mood, perhaps even taste – a form of attitude,” he said in a major speech late last month.

“An era is determined by cultural trends, collective beliefs and social customs. This is now the task we are faced with: we must embed the political system in a cultural era.”

The most recent cultural target of the pro-Orban press is a Budapest exhibition of the work of Mexican artist Frida Kahlo, which was denounced in an article headlined: “This is the way communism is promoted using state money.” Kahlo was a member of the Mexican Communist Party and had an affair with Russian revolutionary Leon Trotsky.

Szilvester Okovacs, the opera’s general director, insisted that commercial rather than political pressures were behind the decision. This week, he announced that the theme for the opera’s 2019-2020 season would be “Christianity”.