Billionaire given position despite opposition from 48 Democrats and two Republicans 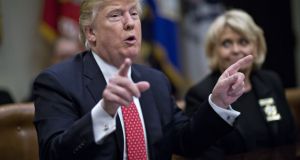 US president Donald Trump praised his education secretary nominee Betsy DeVos on Twitter: “She is going to be a great Education Sec for our kids!” Photograph: Andrew Harrer/Pool/Getty Images

US president Donald Trump’s nominee for education secretary was confirmed by the narrowest of margins on Tuesday, in an illustration of the deepening tensions between Republicans and Democrats on Capitol Hill over Mr Trump’s policies.

Billionaire philanthropist Betsy DeVos was confirmed as education secretary, but only after vice-president Mike Pence cast the deciding vote – the first time in history a vice-president’s vote has been needed to confirm a cabinet secretary.

Two Republicans – senators Susan Collins of Maine and Lisa Murkowski of Alaska – joined the 48 Democrats in the Senate to oppose Ms DeVos’s nomination, leading to the 50-50 tie-break in the 100-seat chamber.

The tensions over Ms DeVos’s appointment, which was opposed by a number of teachers’ unions, played out as a federal appeals court in San Francisco prepared to deliver a landmark decision on Mr Trump’s controversial travel ban.

Lawyers on both sides of the argument were preparing to present their oral arguments to the appeals court late on Tuesday.

Department of justice officials were scheduled to make an oral submission, by telephone, to the San Francisco-based court by 11pm, with Washington state attorney general Bob Ferguson expected to make the case for judge James Robart’s decision that led to the lifting of Mr Trump’s travel ban last Friday.

The court scheduled an hour-long hearing, but it is unclear when it will issue its finding. An appeal to the supreme court by either side is expected.

Mr Spicer earlier this week suggested the ban would be reinstated immediately if the Trump administration’s appeal is upheld. “Once we win the case, it will go right back into action,” he said.

Mr Trump, who has launched a visceral attack on the media in tweets over the last 48 hours, falsely accusing media outlets of failing to cover terrorist events, has continued to argue that the ban is a matter of national security.

The White House on Monday issued a list of 78 “under-reported” terrorist events which they said had not been adequately covered. These included the Brussels and Paris terrorist attacks which were widely reported by US and international media outlets.

Tuesday’s vote on Ms DeVos’s nomination took place after an all-night Senate sitting during which Democratic senators sought to delay the vote.

“In my mind she is the least-qualified nominee in a historically unqualified cabinet,” senate minority leader Chuck Schumer said at the start of the debate, with senator Elizabeth Warren saying it was “difficult to imagine a worse choice to head the department of education”.

But Republican Mitch McConnell said the move to block Ms DeVos was far less to do with the nominee “than with the man who nominated her”, accusing Democratic senators of bowing to “pressure from those on the left who simply cannot accept the result of a democratic election”.

Mr Trump also rowed-in behind his nominee on Twitter, tweeting: “Senate Dems protest to keep the failed status quo. Betsy DeVos is a reformer, and she is going to be a great Education Sec for our kids!”