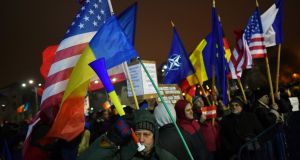 People protest against the government in Bucharest on Tuesday night, in the latest in a series of demonstrations that are the biggest in the city since the fall of dictator Nicolae Ceausescu in 1989. Photograph: Daniel Mihailescu/AFP/Getty Images

Romania’s government has survived a parliamentary no-confidence vote and urged the country to return to business as usual following its biggest street protests in more than 25 years.

Hundreds of thousands of Romanians rallied in their capital, Bucharest, and other cities for several nights last week, in protest at the government’s use of an emergency decree to soften anti-graft law.

The cabinet led by the populist Social Democrats (PSD) scrapped the decree on Sunday, but still faces widespread calls to resign over behaviour that many Romanians say exposed the arrogance and selfishness of a corrupt ruling elite.

“I do hope that as of today we get back to work,” prime minister Sorin Grindeanu told deputies before a no-confidence vote that the government comfortably survived due to its large majority in parliament.

Mr Grindeanu declared that his government had learned lessons from the decree fiasco, which threw it into crisis just a month after taking power and two months after the PSD secured a resounding election victory.

“The government will continue to support the fight against corruption and strengthening of rule of law. I promise that from now on this government will be one of dialogue and public consultation on major issues that concern all of society,” Mr Grindeanu said.

He insisted his cabinet understood “fully all the emotion and anger that the emergency decree generated” and vowed not to accept “any other initiative of this kind”, promising to govern through “discussion and dialogue”.

Having flatly refused during the first nights of protest to scrap the decree, a chastened Mr Grindeanu said his compatriots had “every right to shout their discontent” and he praised the peaceful conduct of the rallies and the “creativity” of their often-humorous flags, placards and slogans.

Many influential people – including PSD leader Liviu Dragnea – who have been convicted of fraud or face investigation for corruption would have benefited from the decree, which was condemned by the European Union and United States.

Mr Iohannis – who joined the street protests on at least one recent night – told the government to find a swift solution to the crisis.

He said the resignation to date of just one minister over the affair was not enough, while also insisting that it was too soon for snap elections.

Justice minister Florin Iordache is under huge pressure over his handling of the emergency decree and its dramatic effects, and Mr Grindeanu said a decision had already been made on his future, which would be announced tomorrow.

Protests have continued since the government withdrew its decree, albeit with smaller numbers, and many Romanians still want the government to resign.

“With great effort, our society managed to create a mechanism that made people answer for their crimes. Grindeanu’s government . . . tried to completely erase all that effort.”

1 Covid-19: One more death and 174 further cases confirmed in State
2 German nudist chases wild boar that stole laptop at Berlin lake
3 Midlands lockdown: ‘Why shut down Offaly and leave Dublin open?’
4 Glynn says there is no guarantee restrictions in three counties will be lifted after two weeks
5 Midlands lockdown Q&A: Firstly, is it a lockdown or not?
Real news has value SUBSCRIBE