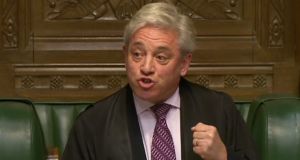 The speaker of the House of Commons has defended his statement of opposition to inviting Donald Trump to address the joint houses of Parliament but apologised to his counterpart in the Lords for not giving him advance warning.

John Bercow told MPs that he was “honestly and honourably seeking to discharge my responsibilities” as speaker when he said Mr Trump’s “racism and sexism” made him unworthy of an invitation.

“The house has always understood that the chair has a role in these matters. If you disagree with the means of my exercising it, that is one point, or if you don’t always approve of my manner . . . so be it,” he said.

Although Mr Bercow’s statement on Monday won applause in the house and praise from opposition MPs, some Conservatives accused him of “crossing a line”, with some urging him to consider his position. The speaker of the Lords, former Conservative minister Norman Fowler, said Mr Bercow had apologised for failing to consult him.

Lord Fowler said it was established convention that both speakers agreed on whether foreign leaders should address a joint session of parliament.

“Yesterday in the Commons, Mr Bercow said that he was opposed to the president speaking. I should make it clear that I was not consulted on that decision or its timing,” Lord Fowler told the Lords.

“However, the speaker contacted me this morning. He told me that while he maintained his view on the issue he was generally sorry for failing to consult with me. Obviously, I accepted that apology.”

Lord Fowler said he would not express a view on whether the US president should be invited, but he stressed his own record in opposing discrimination, especially against LGBT people and people with HIV/Aids.

Some Conservatives accused Mr Bercow of hypocrisy and grandstanding, pointing out that he had welcomed the leaders of despotic regimes in China and Kuwait to Westminster.

“It was a performance, it was John Bercow playing to the gallery and I think it was damaging to the national interest. I think it is regrettable that he did it,” said former culture secretary John Whittingdale.

In the House of Commons, Conservative backbencher Gerald Howarth said it was clear on Monday when the Speaker made his statement that he was not speaking for the entire House.

“It was noticeable that there was great enthusiasm on the opposition benches and a rather subdued aspect on the government benches . . . I do hope that you will help us to ensure that we can have full confidence in your impartiality, because that is the way that this house has to proceed,” he said.

Theresa May’s spokesman declined to comment directly on Mr Bercow’s statement but reaffirmed the government’s intention to press ahead with Mr Trump’s state visit to Britain later this year.

“What John Bercow suggests to parliament is a matter for parliament,” he said.

“What I will set out is our position, which is that we’ve extended this invitation to the president and we look forward to receiving him later this year.”